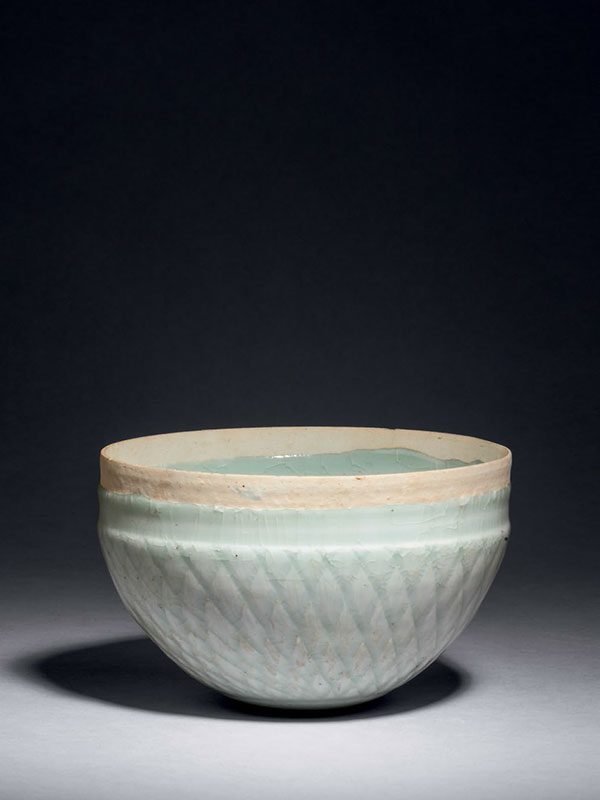 A qingbai porcelain bowl, the very thinly potted, deeply rounded sides rising from the footless base with concave centre and ending in a straight rim. The exterior of the bowl is carved with a crosshatched design, imitating a basket weave pattern. The bowl is covered in a transparent glaze of even, pale blue hue that pools to darker tone in the crevasses. The rim of the bowl is wiped clean of glaze, showing the very fine white porcelain body.

This extremely delicate qingbai porcelain deep bowl shows the finest quality the potter was able to achieve in the Northern Song dynasty. It is so finely potted that it becomes translucent when a light is shone through it. The form with a crosshatched design derived from metal wares, such as a Song dynasty silver basin, which was excavated in 1981 from tomb M2 at Huanshuizui, Anhui province. [1]

The rim of the present bowl is unglazed, indicating that it was fired upside down. Due to the brittleness of the unglazed porcelain, the rim was probably originally bound in a thin strip of metal to prevent it from getting damaged. A slightly smaller qingbai porcelain bowl of closely comparable deep-rounded form and decoration was recovered from a tomb dated to 1127 AD in Wuyuan county, Jiangxi province (fig. 1). [2]     Another qingbai-glazed deep bowl with straight sides and with the remains of metal on the rims, made in Jingdezhen at Jiangxi province, was excavated in 1964 from a Southern Song tomb in Hubei province and now is in the collection of the Hubei Museum. [3] Another comparable bowl with slightly wider crosshatched pattern is in the Koo Liong Bin family collection. [4]