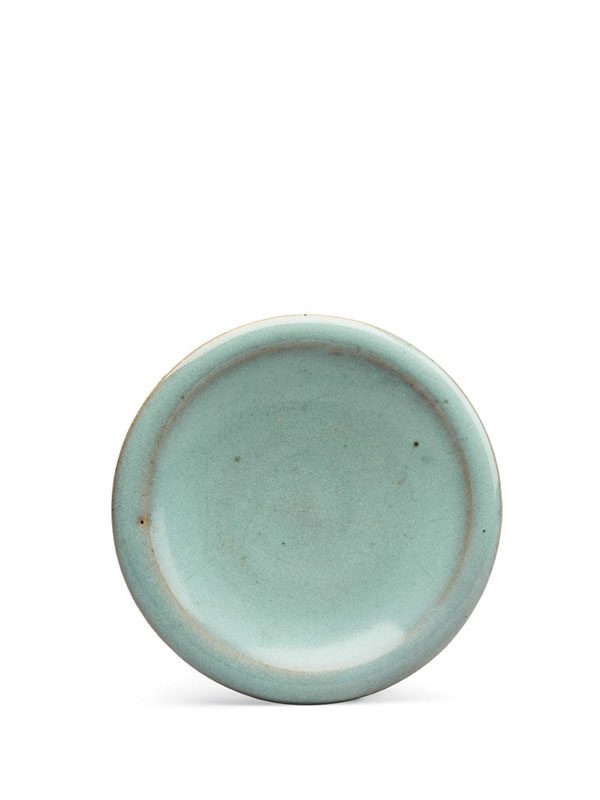 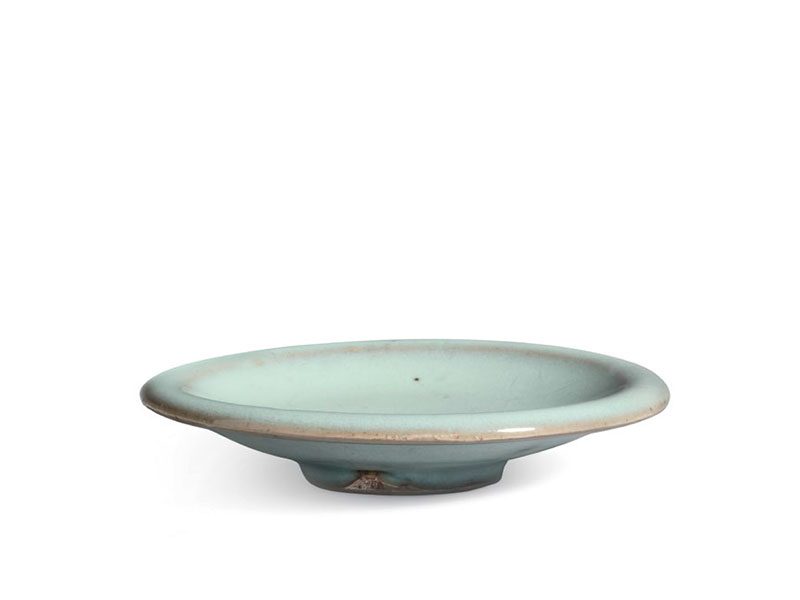 A small stoneware shallow saucer of circular form, supported on a short foot. The concave interior is gently splayed and terminates in a flared rim. The interior and the exterior of the saucer are covered in a lustrous sky-blue glaze with greyish tinge, stopping unevenly around the footring and revealing the buff stoneware body of yellowish-brown colour. The translucent glaze is thinner around the rim, where the buff stoneware body underneath is also visible. The footrim has clusters of kiln grit adhering.

The vivid sky-blue glaze of this saucer is the most representative colour of jun wares. Jun wares were later classified as one of the five classic wares of the Song, which also include ru, ge, guan and ding ceramics. The function of small saucers with flared rims is still in debate. Saucers like the present example were commonly catalogued by contemporary Chinese as a ‘brush lick (bi tian or bi chan)’, a type of traditional object for the scholar’s table to allow the brush to evenly concentrate the ink or make the brush hair smooth. However, it seems the use of these saucers only became popular later during the Ming dynasty (1368 – 1644), when they are listed as one of the essentials in scholar’s studio in Kao Pan Yu Shi (Desultory Remarks on Furnishing the Abode of the Retired Scholar), a 1590 compendium on the art of living by Ming dynasty author Tu Long. Some scholars, such as Regina Krahl, instead think that it may have been used for drinking tea, as the saucers could serve both as covers and as stands. [1] A closely comparable jun saucer of similar colour glaze and size, also dated to the Northern Song or Jin dynasty, is in the Meiyintang collection. [2] Another smaller Northern Song saucer with slightly darker glaze is in the collection of the Palace Museum, Beijing (fig. 1). [3] A further comparable jun saucer with a greyish-blue glaze and dated to the Jin to Yuan dynasty, is in the Art Gallery of the Chinese University of Hong Kong. [4]