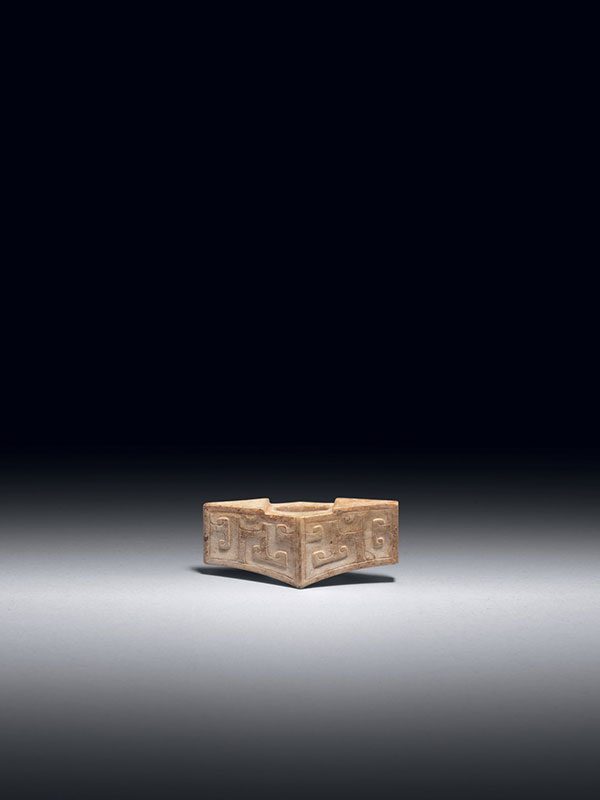 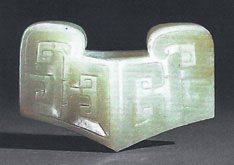 A jade sword guard of conventional form, carved as an approximately triangular shape with a central hole. The body has a ridge in the middle and gradually diminishes towards either end. The slightly curved sides are carved in low relief with angular interlocking scrolls. The original yellowish jade is calcified all over and has acquired a creamy white colour.

Jade sword guards are among the jade fittings on swords developed during the late Eastern Zhou and Han dynasty, together with a round pommel ornament, a trapezoidal chape and a scabbard slide. Weapons with jade fittings suggest that the piece was of great value and would have conferred prestige on its owner by attracting greater attention than a more ordinary unadorned weapon.[1] On slightly earlier sword guards the decoration on the sides is focused around pairs of taotie eyes, which are derived from designs originally developed on early Eastern Zhou swords in south-eastern China. Examples with incised lines, more simplified decoration and with the absence of eyes, such as the present one, indicate a slightly later date.[2] A celadon jade sword guard adorned with taotie decoration, excavated from tomb at Sichuan province in 1955 and dated to the Warring States period, is in the collection of the National Museum of China.[3] Two comparable examples, similar in the more simplified decoration and both dated to the Han dynasty, are respectively in the collections of the National Palace Museum, Taipei[4] and the British Museum (fig. 1).[5]