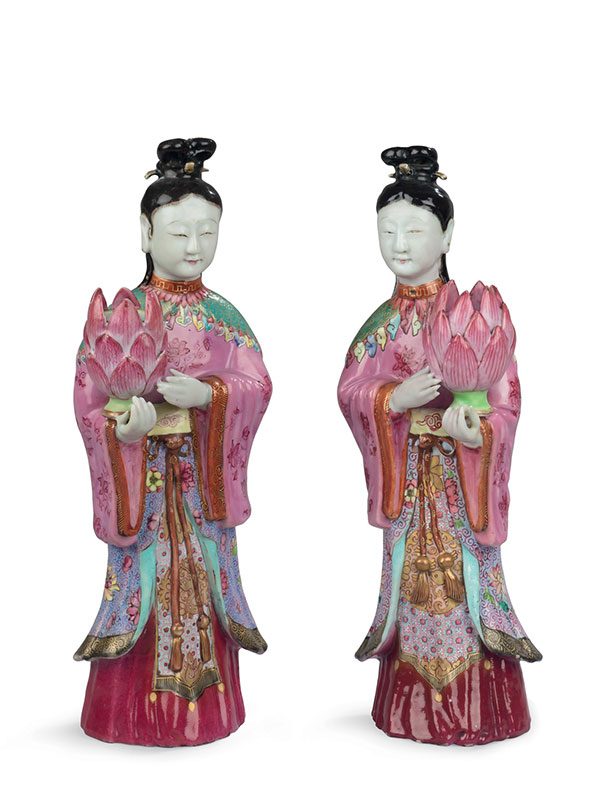 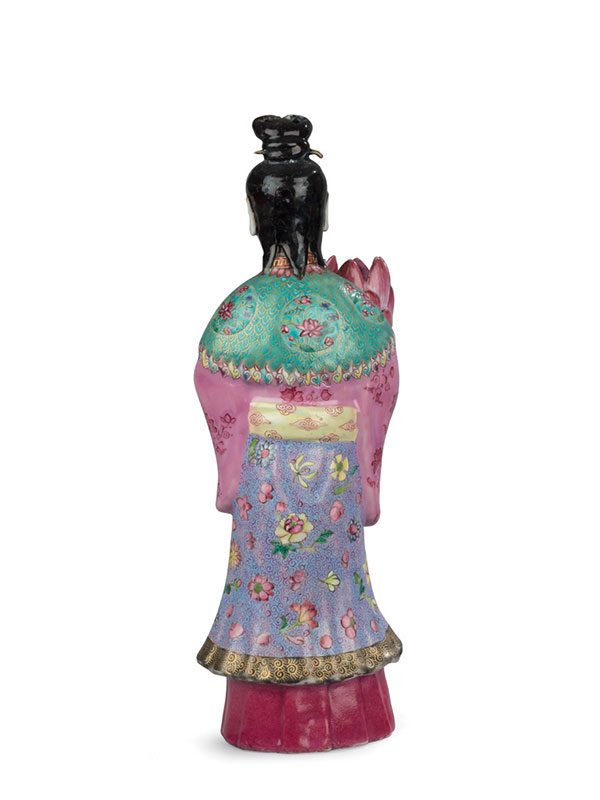 A pair of famille rose porcelain candleholders, each in the form of a standing female immortal. The figures are dressed in layered robes with long sleeves. A feathered shawl, decorated with a lotus pond in roundels against a light green ground, covers their shoulders. Both figures have their arms half raised and hold in their long-fingered hands a large lotus as a candleholder in front of them: one figure holds her lotus to the right, the other figure to the left.   The hair is neatly arranged and partly tied into a high chignon secured with hairpins, and partly covers the backs of their necks. The precisely modelled faces have demure expressions with delicate features. The beautiful robes are painted with flower and cloud motifs in various colours against a bright pink and light purple ground. Some gilding is also evident on the figures.

This delicate pair of candleholders made of porcelain painted with opaque overglaze polychrome decoration in pink tones is a type of porcelain known as famille rose. Being candleholders, they were almost certainly intended for the Western market. The colours, mainly shades of pink and carmine, were known to the Chinese as yangcai (foreign/Western colours) because they were first introduced from Europe about 1685 when the term was used in the Kangxi reign (1661 – 1722). By the time of the Yongzheng reign (1723 – 1735), famille rose wares gained their dominance in the market. A closely comparable famille rose figure of Xi Wang Mu (the Goddess of the West) of similar size and colour palette, dated to the 18th century, is in the collection of the British Museum (fig. 1).[1] A pair of famille rose porcelain candle holders shaped as cheerful young boys, dressed in floral tunics are illustrated in Qing Porcelain: Famille Verte, Famille Rose.[2]

One has a paper label attached to the base, reading E. Harmsworth 13.S