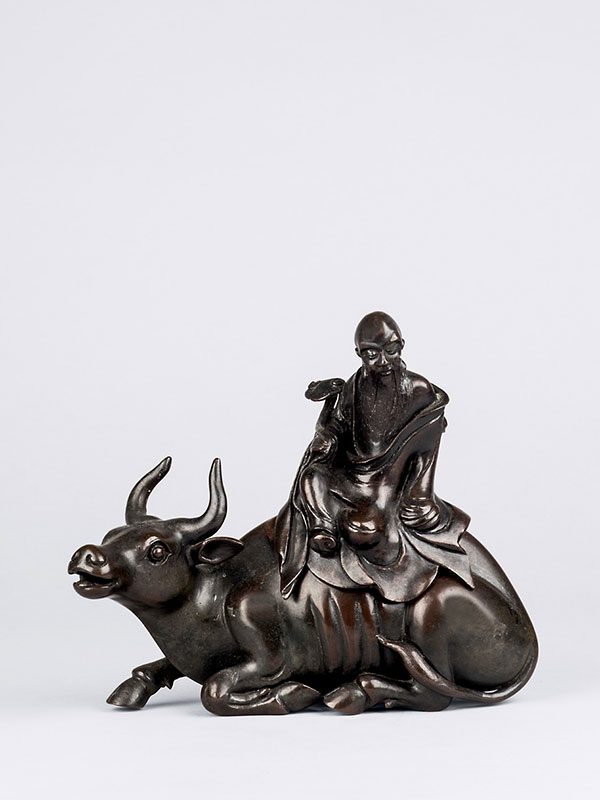 A bronze incense burner in the form of an ox with rider. The horned ox is depicted in a recumbent posture, its four legs tucked underneath its body and a bushy tail curled neatly around its rear haunches. Its spindle shaped eyes, ears, mouth and nostrils are finely cast. He slightly lifts his head and turns to one side. A bewhiskered male, known as Laozi, sits on the back of the ox and holds a branch of lingzhi in his right hand. He wears a loosely pleated robe and his chest is half revealed. A cloud-shaped hole in the back of the rider’s robe and the open mouth of the ox both allow the perfume or smoke to evaporate. The bronze is predominately of metallic brown colour, with some areas of dark patina.

The old, bewhiskered male riding an ox is known as the historical founder of Daoism, Laozi. According to Chinese legend, Laozi decided to leave China because of its corrupt rulers, but as he was leaving the country on the back of an ox, he was stopped at the western border by guards, and asked to write down his philosophy, known later as Daoism’s most famous text, the Tao-te Ching, which dates back to the 6th century BC.[1] The first depictions of Laozi did not appear until about the 5th century. Before then, he was probably represented by suggestive symbols as an empty seat beneath a sacred canopy or an umbrella, like most of the spiritual leaders. The depiction of Laozi astride an ox represents the Daoism’s belief in naturalness and ‘doing through not doing (wu wei er zhi)’. A comparable bronze incense burner in the form of a standing ox and rider, dated to the 18th century, is in the collection of the British Museum.[2] Another bronze incense burner, similarly cast in the form of Laozi riding a buffalo and inscribed with a cyclical date corresponding to 1629 or 1689, was included in the exhibition Between Heaven and Earth: Secular and Divine Figural Images in Chinese Paintings and Objects.[3]