Porcelain bowl and cover in imitation of lacquer 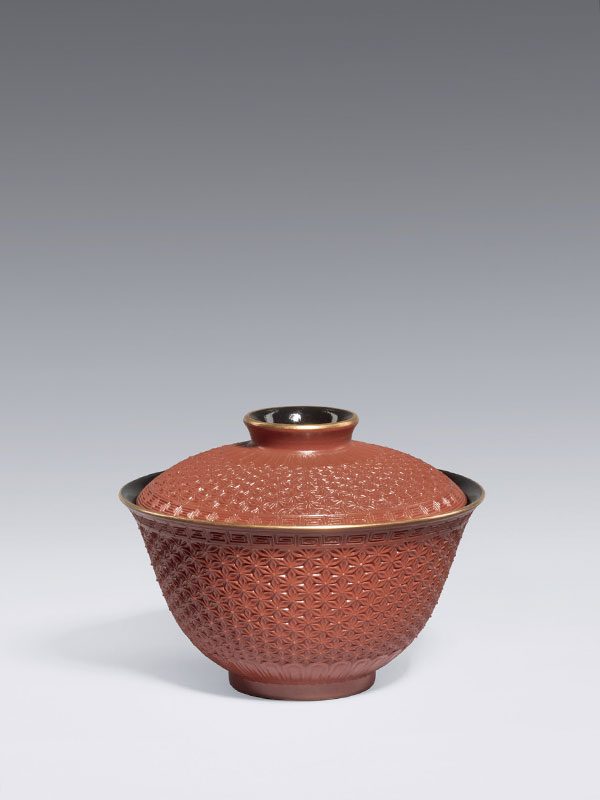 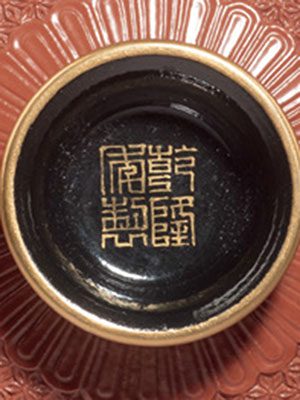 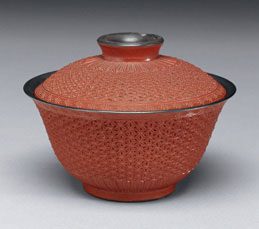 A porcelain bowl and cover, supported on a short straight foot. The sides are splayed outwards and terminate in a flared rim. The domed cover has a raised circular knob. Both the body and the cover are carved in low relief in imitation of lacquer, displaying an intricate linked-pearl pattern. A band of lotus flower petals encircles both the lower part of the body and the knob, whilst the rims of the bowl and cover are adorned with continuous key-fret pattern. The exterior is covered in a layer of coral red glaze, whilst the interior and inside of the knob and the base are glazed black. The rims of the knob, cover, the body and the base are gilded. A four-character gilded spurious mark of Qianlong (Qian long nian zhi, ‘made in the Qianlong reign’), can be found both inside the knob and on the base.

This rare type of porcelain covered in a coral red glaze in imitation of cinnabar lacquer was produced in Jingdezheng at Jianxi province, where pieces were famously made during the Qianlong reign (1736 – 1795). During this period, the imperial workshops in Jingdezhen gathered many top craftsmen and gradually developed the skill and the techniques to use porcelain to imitate other materials such as wood, bamboo, bronze and lacquer. This type of ware is very rare, probably because lacquer wares themselves are already uncommon. A closely comparable example, similar in size and proportions, with a similar linked-pearl pattern and with silver lining to the interior, bearing a six-character Qianlong mark on the base and designated of the period, is in the collection of the National Palace Museum in Taipei (fig. 1).[1] A deep bowl of squat circular form, similar in the linked-pearl pattern and with gilded interior, is in the collection of the Palace Museum, Beijing.[2] Two further comparable porcelains imitating carved lacquer examples, a box decorated with plum blossoms and a vase decorated with one hundred shou characters, both dated to the Qianlong period, are in the collection of the National Palace Museum in Taipei.[3] Another deep bowl decorated with bats flying over waves, dated to the 18th century, is in the collection of the Metropolitan Museum of Art in New York.[4]