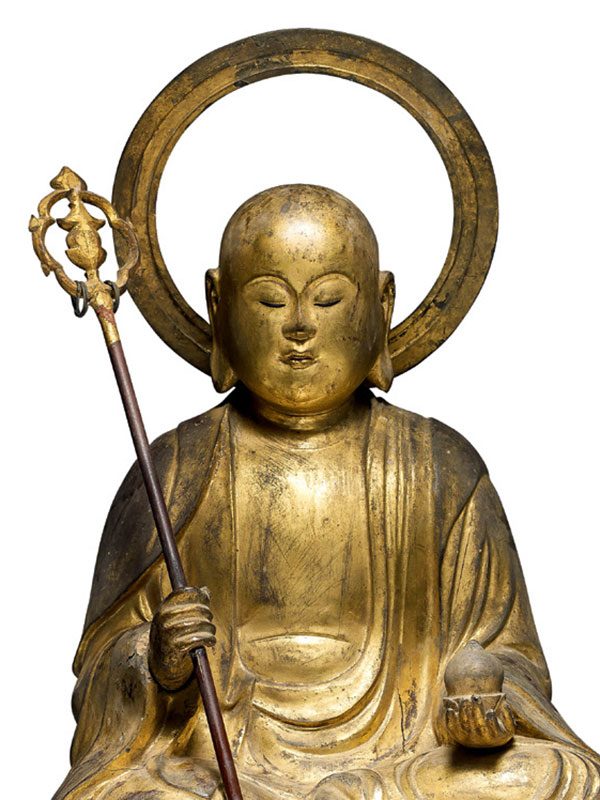 A wood figure of the Buddha, seated on a double lotus base with his left leg drawn up and his right leg dangling down. The figure is dressed in elaborately folded robes, which cover the shoulders, fall open at the chest and leave the feet exposed. The face has a serene, half-smiling expression and symmetrical features, a sensuous mouth and a long, straight nose. The hooded eyelids cover the eyes and are surmounted by arched eyebrows. The ears have long pendulous lobes, the ends of which are pierced. The Buddha’s right hand is raised and holds a pointed sceptre, fitted with loose rings. His left hand is extended forwards, palm upwards, and holds a large peach. Positioned at the back of the Buddha’s head is a circular wood halo.

Jizo Bosatsu (Bosatsu in Japanese for Boddhisattva) is one of the most beloved deities in Japanese Buddhism, one who achieves enlightenment but postpones Buddhahood until all can be saved. In Buddhism, especially esoteric Buddhism, many beings that attain or renounce Buddhahood are present to show the way to Nirvana. Some of them, like Jizo Bosatsu, made two vows. One, to take responsibility for the instruction of all beings in the six worlds between the death of Shakyamuni Buddha (the historical Buddha) and the rise of Miroku Bosatsu (Buddha of the future). The other, not to achieve Buddhahood until all hells are emptied, or in other words, until all can be saved.