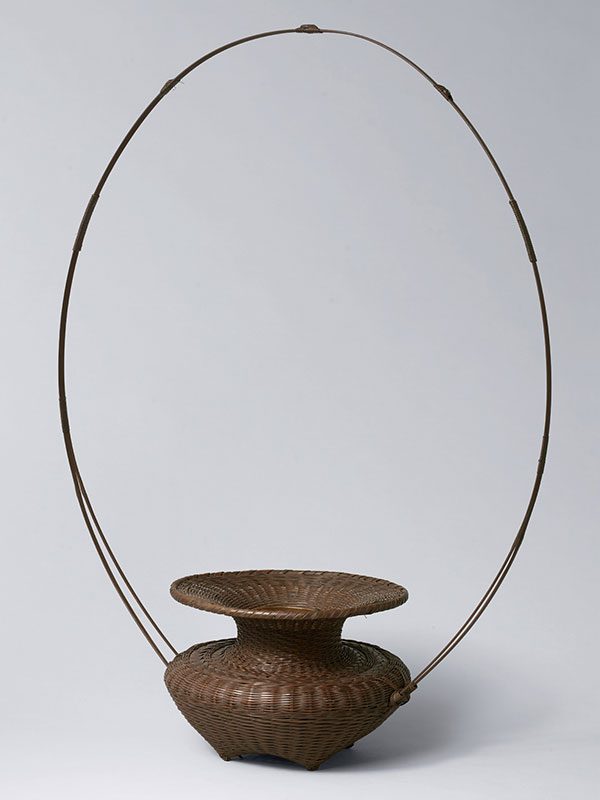 A finely woven and large bamboo ikebana basket of circular form, supported on four integral feet and surmounted by a short neck with broad, everted rim. Two pairs of wooden tubes are mounted on the shoulder, into which slots the high, overhead bamboo loop handle, which is composed of several sections joined together. Signed Yamaguchi Ryuun.

Yamaguchi Ryuun was born in 1940 in Saga Prefecture. He is based in Oita Prefecture and has been a member of the Nitten Exhibition of Arts and Crafts since 1993. He was a pupil of Living National Treasure Shono Shounsai (1904–1974). He took part in the 2013 exhibition Fired Earth, Woven Bamboo at the Museum of Fine Art, Boston.[1] Yamaguchi Ryuun’s work entitled Dawn (1969) was purchased and exhibited at the NGV Art Museum as part of the Myer collection in 2012. His works can be found at the Museum of Art and Design in New York, the Asian Art Museum in San Francisco; the Art Institute of Chicago and the Philadelphia Museum of Art.