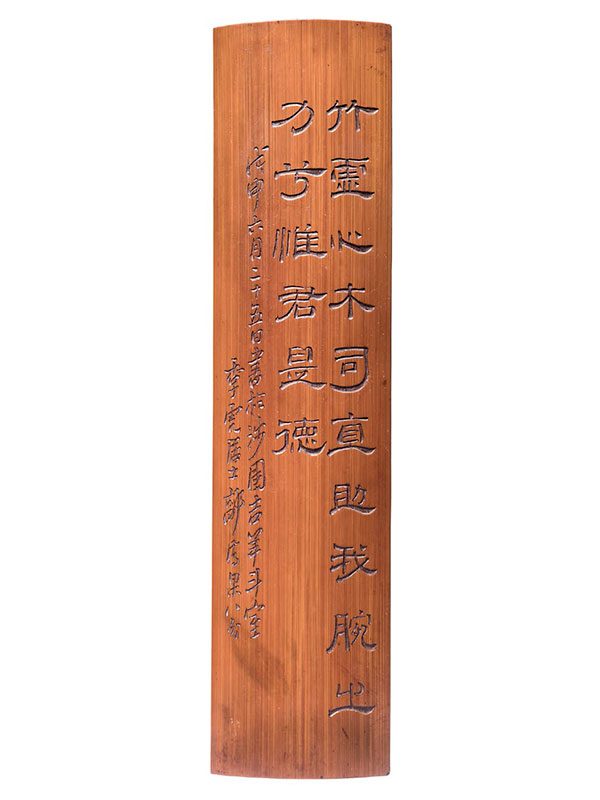 A rectangular wrist rest carved from a section of bamboo. The curved, convex surface is engraved with an inscription of 14 Chinese characters in seal script, and 15 smaller characters in semi-cursive script. The inscription mentions that this piece was carved and inscribed by a scholar on the 25th June of the Wushen year, corresponding to 1848 AD. The bamboo has acquired a dark amber patina.

Wrist rests, commonly found in a Chinese scholar’s studio, were used by literati in the art of calligraphy to steady the hand whilst painting graceful brush strokes. Although very little is known of the origins of wrist rests, most were made of simple segments of bamboo, whilst their carvers were also skilled in the arts of painting, poetry and calligraphy. The material bamboo was widely used for scholar’s objects, not only for its accessibility but also for its symbolic meaning. Confucians likened bamboo’s ability to bend without breaking to being a desirable virtue in a ‘gentleman (junzi in Chinese)’.1 The inscription carved on the wrist rest can be translated as follows “This bamboo piece helpfully supports my wrist, and with the virtue of a gentleman.” Comparable bamboo wrist rests, dated to the Qing dynasty, are in the collections of the Shanghai Museum 2 and the Victoria and Albert Museum.3