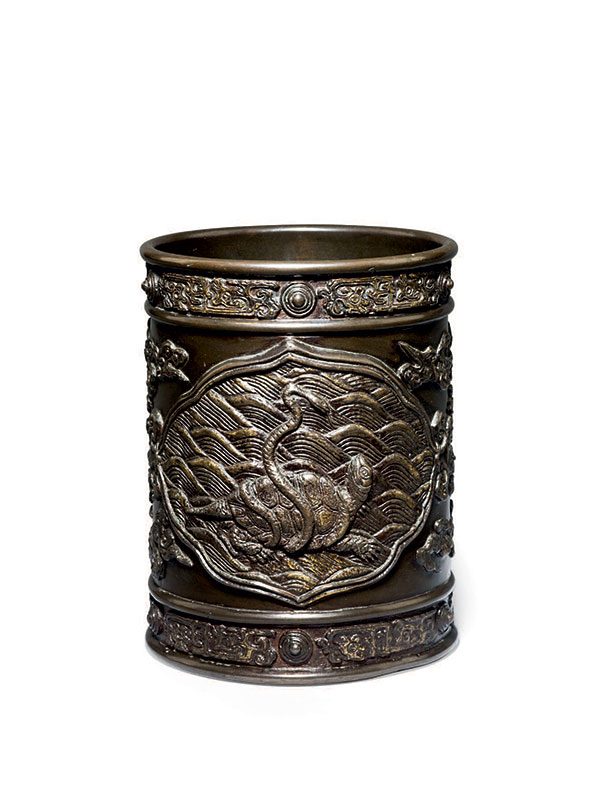 A bronze brush pot of cylindrical form with a flat base. The body is cast in low relief with two framed scenes, each depicting a turtle entwined with a snake among waves. The sides are decorated with beribboned ruyi-head patterns. Around the edges of the rim and the base are friezes composed of five sets of entwined chi-dragons, separated by five circles. The bronze is of even, dark bronze colour. The base is stamped with a three-character mark reading Wei Jin Zuo within a rectangular panel.

This solidly cast bronze brush pot is an example of later Chinese bronze, unusual both for its function and decorative motifs. As common scholar’s objects, brush pots were most frequently made out of wood. Bronze examples are rare and were perhaps made to match other bronze objects in the studio. The motif of a turtle entwined with a snake is known as the Black Warrior, Xuan Wu in Chinese. By the Han dynasty (206 BC – AD 220) it had become the symbol of the North, one of a set of animal symbols of the four cardinal directions.[1] During the early Northern Song dynasty (960 .1126), Xuan Wu transformed into the anthropomorphic Daoist deity known as the Perfected Warrior, Zhenwu, who was worshipped by various Song emperors. He enjoyed his greatest popularity during the Ming dynasty (1368 – 1644), when the Emperor Yongle (1403 – 1424) ordered a massive building campaign, known as the Purple Forbidden City (Zijincheng), on Wudang Mountain as Zhenwu’s sacred peak.[2] A comparable Ming dynasty bronze brush pot inlaid with silver and partly gilt and with landscape decorations, attributed to Hu Wenming, 3 was included in the 1986 exhibition Arts from the Scholar’s Studio.[3]