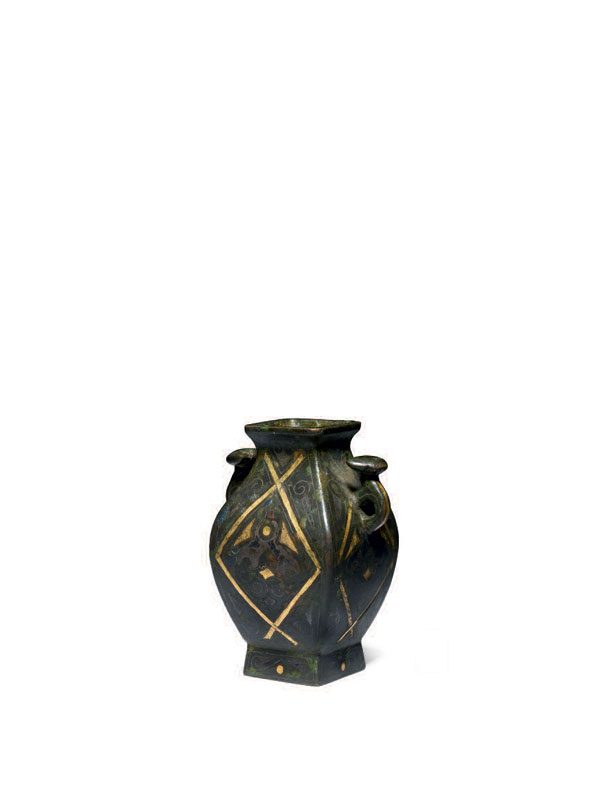 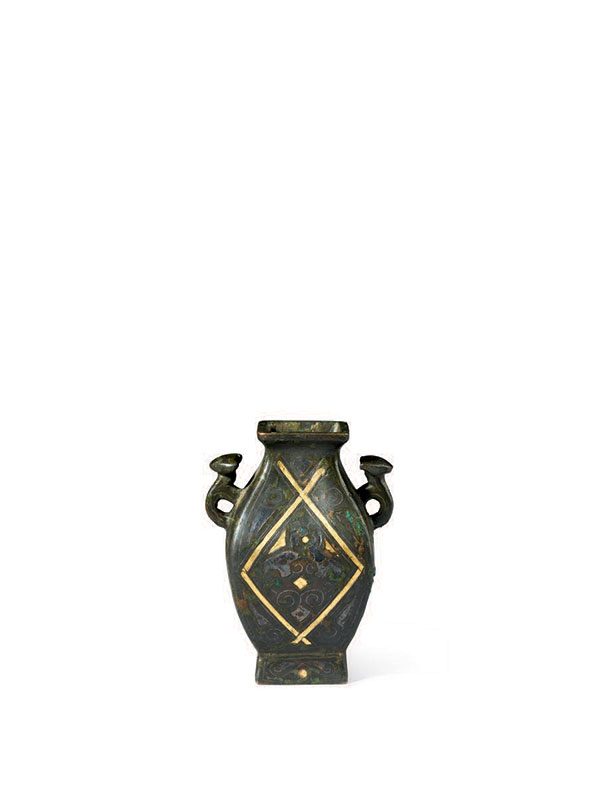 A miniature bronze vessel of archaic fanghu form, of baluster shape and square section, supported on a short foot and flaring outwards at the neck. Two small loop handles with taotie masks on the top adorn the upper part of the vessel. Each side of the body is decorated with a gold inlaid diamond.shaped pattern, containing elaborate silver inlays of swirl and heart.shaped patterns. The bronze is predominately of brown colour, with some areas heavily patinated in a dark green colour.

The form of this miniature bronze vessel is known as fanghu (‘square jar’), a type of wine vessel that first made an appearance towards the end of the Shang dynasty and remained part of the vocabulary of Chinese bronze shapes until the end of the Han dynasty.[1] This miniature piece is difficult to date precisely because of its inlaid designs and its miniature form. Some closely comparable inlaid pieces of archaic forms were originally dated to the Song dynasty (960 – 1279) by Watson and Jenyns,[2] but are now suggested by Rose Kerr to have a late Ming to early Qing date according to thermoluminescence tests at Oxford.[3] Kerr further indicates that, “a late Ming to early Qing date is possibly significant when we consider how some inlaid bronzes were used…. during the Qing dynasty (1644 – 1911), collectors are said to have devoted much time to amassing miniature treasures which they kept in curio cabinets.”[4] Four comparable miniature bronze vessels of archaic form are in the collection of the Victoria and Albert Museum.[5] Among these four pieces, a vessel of hu form is particularly similar in the design of the two loop-handles.[6] A similar bronze hu with comparable loop handles, dated to the Ming to Qing dynasty, is in the collection of the National Palace Museum, Taipei.[7] A further closely comparable miniature bronze fanghu, slightly larger in size but with similar gold and silver inlaid decoration, is dated to the Qing dynasty and is in the collection of the National Palace Museum in Taipei.[8]