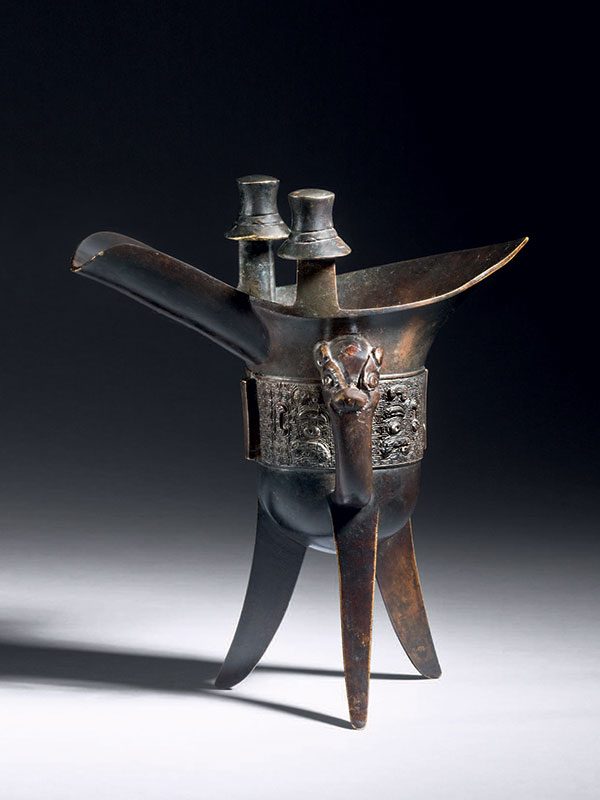 A bronze libation vessel of archaic jue form, the deep U-shaped body supported on three slender, slightly splayed legs that end in sharp points. The vessel has a long curved spout; opposite it the rim rises into a pointed flange. Close to the base of the spout are two semi-circular posts, capped by hat-shaped finials. A C-shaped handle is attached to one side, emanating from a finely detailed bovine mask with prominent eyes and ears. A single, broad band of intaglio ornament encircles the vessel. It consists of a complex pattern incorporating two bold taotie masks with bulging eyes. Two raised vertical flanges interrupt the frieze, dividing it into two almost equal sections.

The prototype of this finely cast vessel is an archaic bronze jue dated to the early Western Zhou dynasty (c. 1046 – 771 BC), such as an example of closely comparable size, shape and decoration in the collection of the Shanghai Museum.[1] Jue, one of the major types of archaic bronze vessel, were used in rituals for warming wine and for drinking. It is assumed that this custom continued during the later period in Confucian ceremonies honouring ancestral spirits.[2] Chinese literati not only collected ancient bronzes but also used them on special occasions; realising that too frequent use of their prized antiquities would ruin them, the literati sought newly made bronze vessels of similar shape and decoration. This encouraged both the renaissance in bronze and the taste for archaism that is such a hallmark of later Chinese culture.[3] A bronze jue covered with irregular gold splashes, comparable in size, design and dated to the late Ming dynasty, was exhibited in the Fung Ping Shan Museum, University of Hong Kong in 1986.[4] Four further comparable bronze jue dated to the Ming and Qing dynasty, are in the collection of the Victoria and Albert Museum.[5]