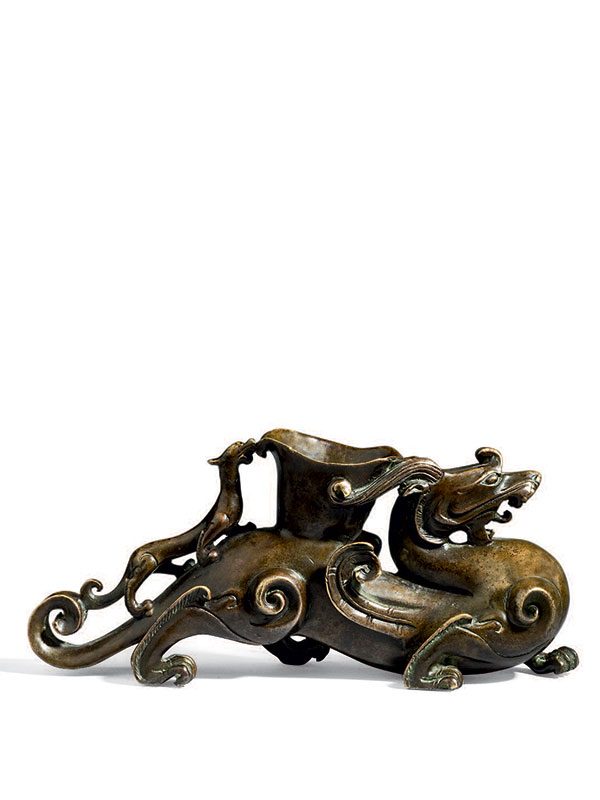 A bronze sculpture in the form of a mythical creature, bixie, carrying a vase-shaped container and a smaller bixie on its back. The horned creature crawls with its four legs powerfully along the ground. Its long tail extends backward and curls back, forming a dynamic movement together with the winged body. Its spindle shaped eyes, wide-opened mouth and strong jaw are cast in detail. The bronze is of even dark brown colour, with some areas of greenish patina.

This gracefully cast and well detailed bronze sculpture of a mythical creature, bixie, is a rare example of a later Chinese bronze with the apparent intention of imitating earlier forms. Bixie (meaning ‘to ward off evil spirits’, also known as pixiu in Chinese and as chimera in the West), a winged four-legged creature with lion-like body, was a popular motif from the Han dynasty (206 BC – AD 220) onwards and also during the Southern and Northern Dynasties (420 – 589). During the Han dynasty, we see pairs of large bixie in stone functioning as tomb guardians[1] as well as funerary sculptures in painted pottery,[2] or jade carvings. Jade carvings of bixie probably inspired the creation of the present piece and are closely comparable in form and dynamic movement: one of similar size was excavated from a Eastern Han tomb in Baoji county, Shaanxi province in 1978 [3] . The current bronze animal may have been used as a scholar’s desk object, such as an incense burner or a candlestick holder, which explains the vase-shaped container on its back. Two bronze censers, one of crouching deer form[4] and the other in the shape of an old man riding an ox,[5] are equally unusual forms for incense burners. A green-glazed ceramic bixie with a comparable tubular container, possibly used as a candlestick holder, is in the collection of the National Palace Museum, Taipei.[6]