Bronze figure of a male immortal 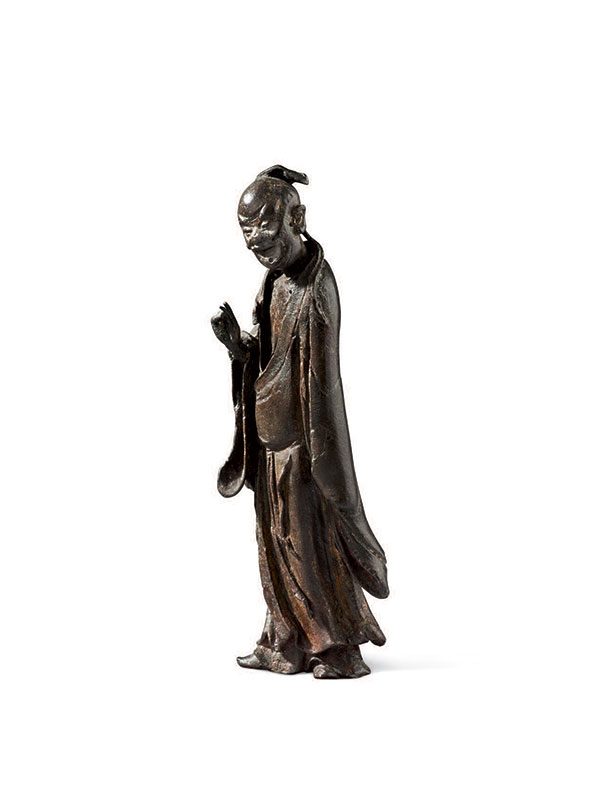 A bronze figure of a male immortal, standing with his chest uncovered and his right hand half raised. He is dressed in loosely layered robes, with the ends tied in knots. His slim body turns slightly towards the left, forming a dynamic movement together with the long robes. His face is cast with a laughing expression, with the hair knotted in a chignon on top of his head. The bronze is of even, dark brown colour.

The precise identity of this figure is unknown, but the fluid lines, masculine features and emaciated chest suggest a late Ming dating. A closely comparable Ming dynasty bronze figure in the Clague collection with similar body features and laughing facial expression but much larger in size, is identified as a Daoist immortal.[1] Two other similar bronze figures are in the collection of the British Museum: one with a very similar laughing expression and hand gesture is dated to the Qing dynasty (1644 – 1911)[2] . The other figure, which has a similar dynamic movement, is identified as Lu Dongbin, one of the Eight Daoist Immortals, and is dated to the 17th to 18th century.[3] Two further bronze figures, also identified as Lu Dongbin, are in the collection of the Victoria and Albert Museum.[4]