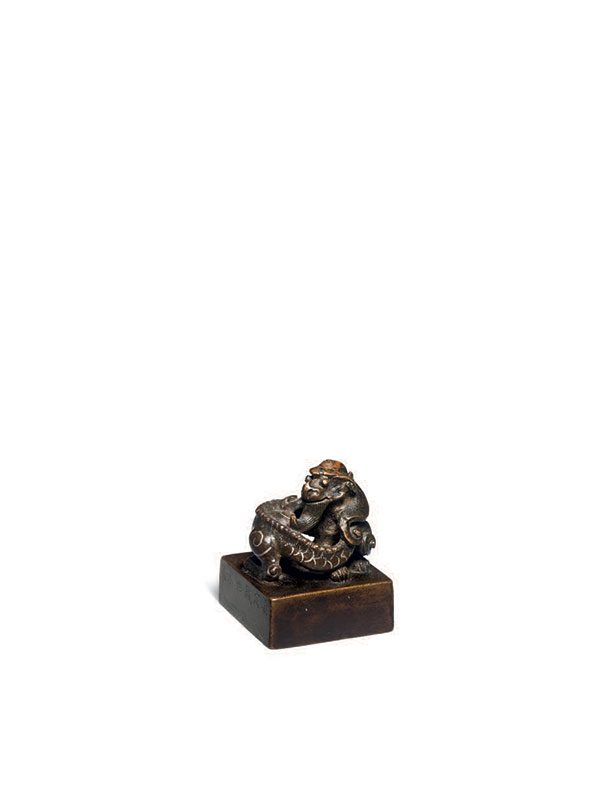 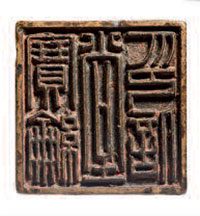 A bronze seal of diminutive size, the silver inlaid knob cast in the form of a coiled dragon. The dragon has a well-defined horned head with bearded jaws, bulging eyes and a bushy mane, and its ridged body is adorned with silver inlaid scales and supported on four strong legs. One side of the base is engraved with an inscription consisting of six characters, which reads Jia Ding Qian Shi Qiu Zhuan (Seal of Qian Shi Qiu in Jiading). The base is cast with an intricate five-character inscription, which reads Bao Lun Tang Yin Xin (Seal of Baoluntang).

This finely cast bronze seal, according to the inscriptions, is a family seal of the Qian clan, and made by a person named Qian Shi Qiu, who lived in Jiading (current Shanghai city) during the Qing dynasty. Baoluntang is the title of the Qian clan’s family shrine in Jiading during the Qing dynasty, and is still in use today. Another silver-inlaid bronze seal also made by Qian Shi Qiu, with a knob in the form of a reclining lion, was included in the exhibition Art Exhibition Series in Prince Kung Palace – Seal Exhibition. [1] A comparable bronze seal of similar size and with a knob in the form of a seated lion, made by Yu Lifu and dated later to 1866 of the Tongzhi reign, was exhibited in the Fung Ping Shan Museum, University of Hong Kong in 1986.[2]