Bronze figure of a foreigner 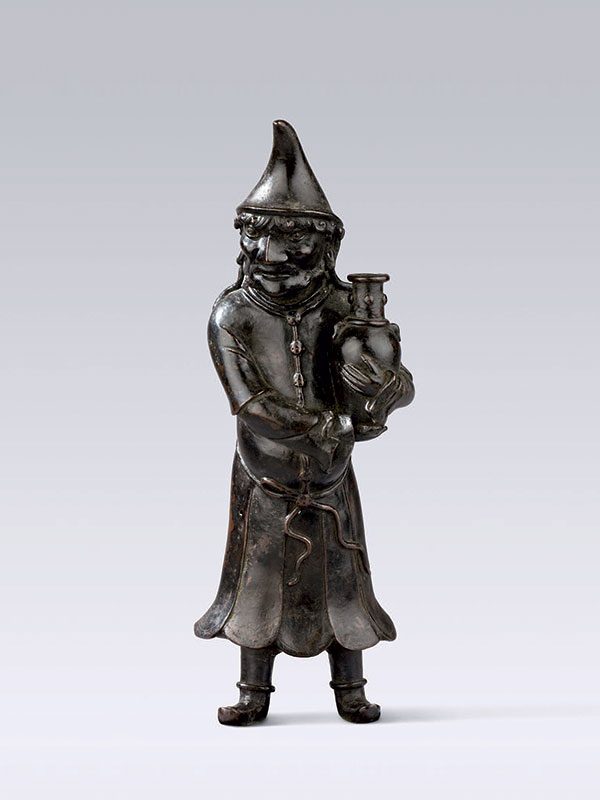 A bronze figure of a foreigner, standing straight with his head slightly turned towards his right, holding up a large vase against his chest. He wears a pointed hat and a layered long robe, which is draped into pleats. His robe is fastened with a string-like cloth belt, emphasising his protuberant belly. His prominent facial features, including large eyes, high cheekbones, pointed ears and a beard with sideburns, all show that he is of foreign origin. The bronze is of even, dark brown colour.

The motif of a foreigner in standing or kneeling position holding a vase, a pearl or a branch of coral, is known as ‘the foreigner offering treasures (huren xian bao)’ and bears stylistic influences from India and Gandhara. Figural representations of foreign people have been part of the Chinese artistic repertoire since the establishment of the Silk Road. The phenomenon first appeared during the Tang dynasty (618 – 906) with the flourish of international trade with Central Asian countries, and subsequently came to symbolise a peaceful era under a powerful nation.[1] Two Ming dynasty bronze examples of foreigners from the George Eumorfopoulos collection, both with similar costumes and with pointed hats, one holding a conch shell, are in the British Museum.[2] A Ming dynasty cast bronze arrow vase in the form of a dancing foreigner, comparable in the depiction of the figures facial expression and the colour of the bronze, is in the Robert E. Kresko collection at the Saint Louis Art Museum.[3]