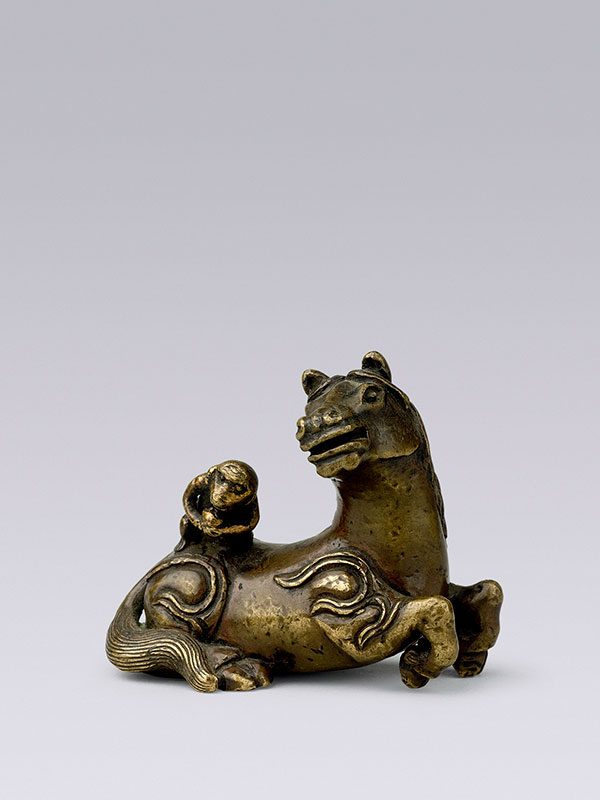 A bronze paperweight in the form of a recumbent horse with a monkey on its back. The horse turns its head toward the right side of its body, and sits with its two front legs half raised, as if the animal is about to rise. Its bushy tail is curled neatly around the hindquarters, and its sides are decorated with a flame-shaped pattern. Its spindle shaped eyes, pointed ears and nostrils are well defined. A small monkey playfully clambers onto the horse’s back whilst holding a ball with its two hands. The bronze is predominantly of a yellowish colour, with some areas showing a darker patina.

This solidly cast miniature sculpture of a horse with a monkey is a fine example of a Ming dynasty bronze paperweight.  It was during the Ming dynasty when the demand for scholar’s objects such as this was high. The horse is a symbol for speed, and the monkey is a pun for ‘marquis’; horse (ma) carrying a monkey (hou) on its back together is a pun “May you immediately be conferred the rank of marquis” or “May you immediately be appointed a high-ranking position (mashang fenghou)”.[1] A closely comparable bronze paperweight in the form of a horse, dated to the Ming dynasty, is in the collection of the Metropolitan Museum of Art.[2]  Another similar Ming-dynasty gilt bronze paperweight in the form of a horse is in the collection of the National Palace Museum, Taipei.[3]