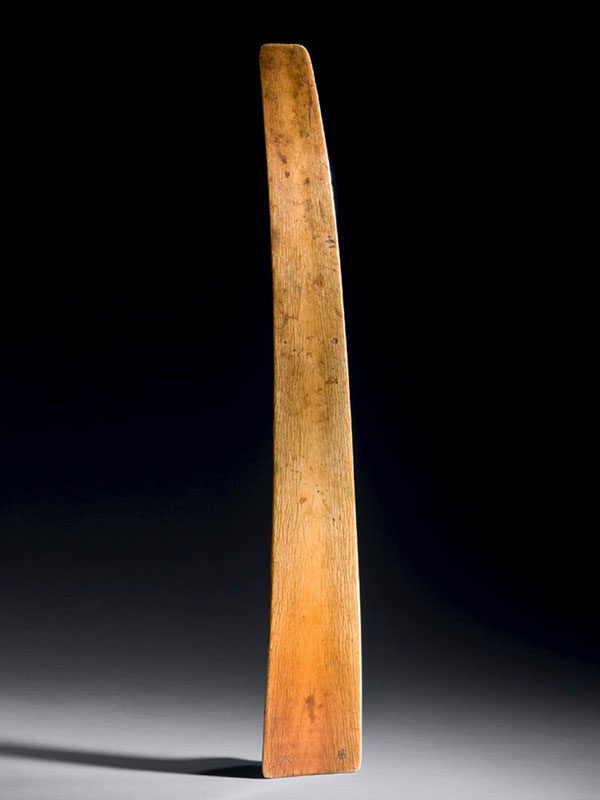 An ivory court tablet of long, curved rectangular form. The tablet has a narrow upper end and broader lower end. The lower end is square in shape, while the upper end is rounded with slightly curved corners. The smoothly carved surface reveals the fine grain and vertical lines of the ivory. The ivory is lightly polished, resulting in a delicate sheen. The lower end is inscribed with three Chinese characters: two on the exterior at either corner, namely da (‘big’) on the left and guang (‘wide’) on the right; and one on the interior at the lower right corner, wang (‘king’). 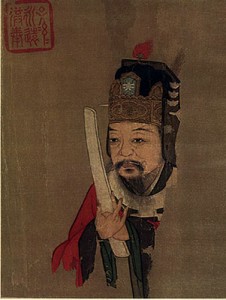 Hu tablets, also known as shouban (‘hand tablet’ in Chinese)[1] were in use as early as the Tang period (618 – 906).[2] During the Ming period officials from the first to the fifth rank used ivory tablets on which to write notes during an audience with the Emperor.[3] The use of the hu tablets was very much confined to the imperial grounds, since they were handed out to the officials by designated doorkeepers upon entry into the palace and later collected for safekeeping.[4] A Ming dynasty painted portrait of Fan Zhongyan (989 – 1052), a prominent politician and literatus who lived in the Northern Song dynasty, illustrates vividly the use of the hu tablet (fig. 1).[5]  Similar Ming dynasty ivory hu tablets are in the collections of the National Palace Museum, Taipei,[6] the Sir Victor Sassoon Chinese Ivories Trust,[7] and the Kwan collection.[8] The comparably small size of this ivory hu tablet suggests that it might have been made earlier than the 16th century, as the sizes increased as the dynasty progressed.[9]