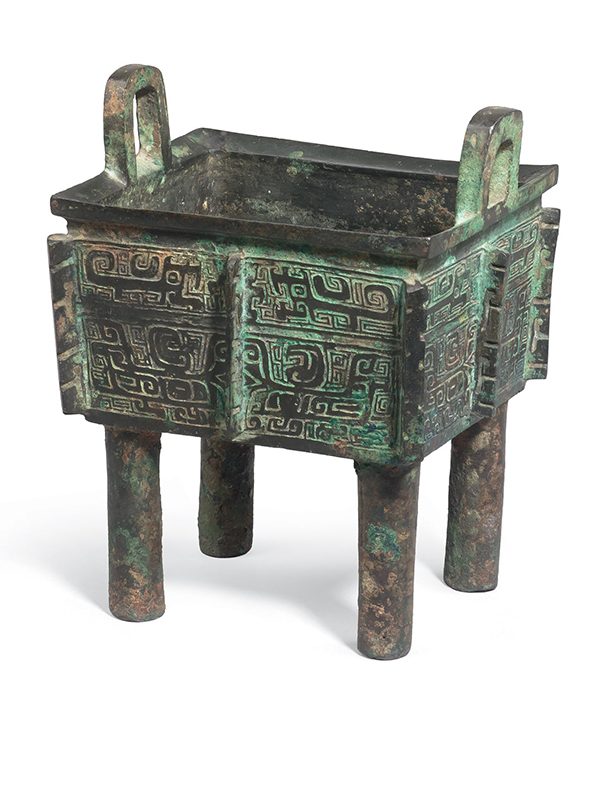 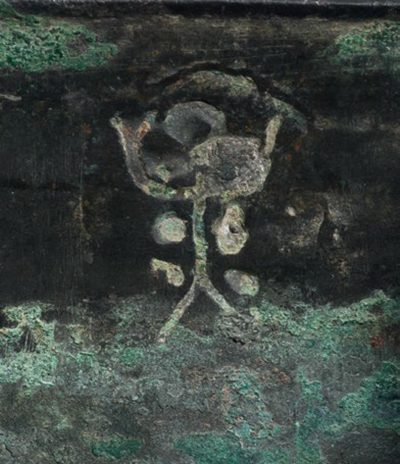 A bronze ritual vessel of rectangular ding form, fangding. The vessel is supported on four columnar legs on the four corners. The slightly inward-canted rim is cast with two inverted U-shaped loop handles.  The decoration of the sides is separated by eight vertical notched ridges, and consists of low-relief taotie masks below a band of confronted, stylised dragons. One of the long sides of the interior is cast with an emblematic inscription. The vessel is covered in a gentle, dark grey and green patina.

The ding tripod was used for cooking and presentation of food, usually animal meat, in ancestral rituals of early China.1 In Chinese culture, possession of one or more ancient ding vessels is often associated with power and dominion over the land. Therefore, the ding is often used as an implicit symbolism for power. Ding were used to make ritual sacrifices, both human and animal, to ancestors. It is unusual to find a rectangular ding, with straight instead of curved sides. A similar Shang dynasty fangding, the decoration in higher relief, a bequest by Addie W. Kahn in 1949, is in the Metropolitan Museum in New York.2 A fangding with an engraved decoration of pendant lappets below a frieze of striding stylised dragons is in the Hardy collection and was exhibited in Venice in 1954 from the collection of C.T. Loo, and in Singapore in 2000.3  Various fangding in the Sackler and Kansas City Museum collections are illustrated by Bagley, but these generally have a decoration that, although similar, is in higher relief.4 Three fangding vessels with high relief or with engraved decoration are in the Avery Brundage collection in San Francisco.5