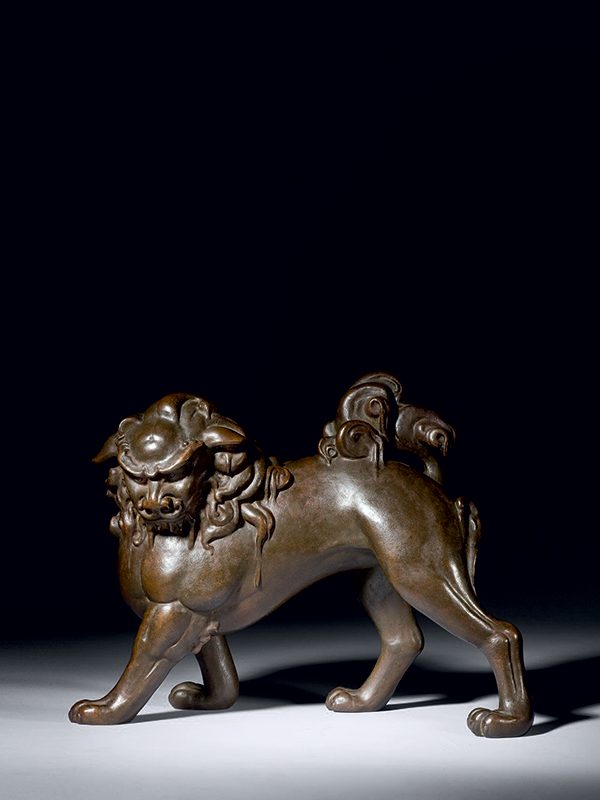 A bronze sculpture of a striding lion, its head turned sharply to the right. The muscular legs are fully stretched in typical striding motion, and are each detailed with a tuft of hair at the top. The bushy tail is held up with the curly ends touching the lion’s back. The powerfully modelled head is finely detailed with an elaborate mane, pronounced eyebrows, bulging eyes, small ears and flared nostrils. The lion is signed underneath on the chest with the two­-character maker’s mark Azumi. The original tomobako is inscribed on the outside of the sliding lid Nure­-shishi (literally meaning ‘a wet or drenched lion’). The inside of the lid is inscribed with the maker’s mark Azumi.

This well observed  and finely cast sculpture of a striding lion was made by the artist Yamamoto Azumi (1880­ – 1945), who graduated from the metal-­casting department at the Tokyo School of Fine Art in 1912. He was taught by Katori Hozuma (1874­ – 1954) and the latter’s pronounced classicism was a lasting influence on him. Hozuma is known to have made a bronze okimono of a lion, which was exhibited at the 1898 Nitten exhibition. Yamamoto Azumi was born in Nagano prefecture and worked  in Tokyo. He exhibited at the Teiten and Shin-­Bunten exhibitions many times between 1927 and 1944 and was made a judge there. The well-­known bronze caster Aida Tomiyasu (1901 – ­1983) studied with the artist.