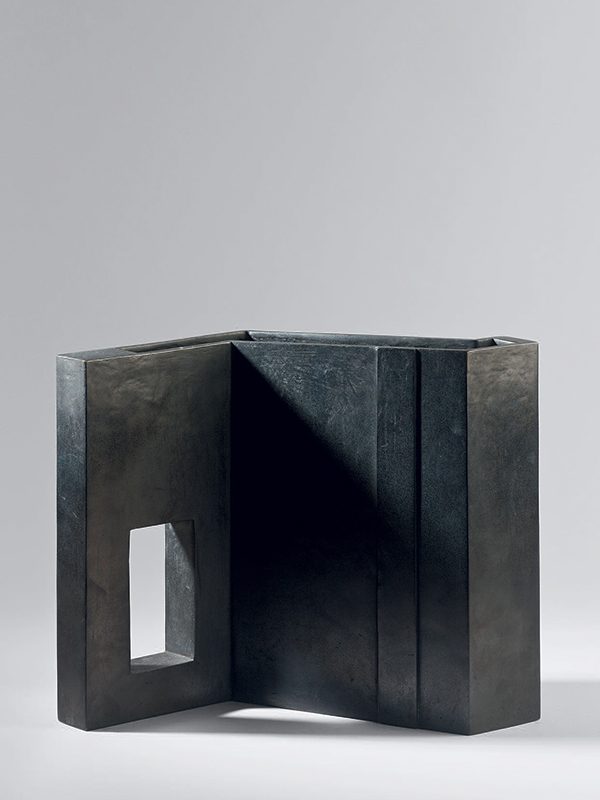 A geometric bronze vase by Yoneda Bisho, the vase of Z­-shaped outline with a large rectangular aperture on one side. The sides are completely plain, with the exception of a single raised vertical band applied to the front. The flat base is inscribed with the three­-character mark of the maker, Yoneda Bisho. The original tomobako is inscribed on the outside Kikakei seido kabin (a geometric shaped bronze flower vase) and on the inside Showa niju­-yo­-nen aki, dai-­go­k-ai Nitten sakuhin, Bisho saku (made by Bisho, an exhibit work at the fifth Nitten exhibition, autumn of Showa 24 (1949))

Yoneda Bisho studied under the well­-known metal artist Katori Masahiko, the leading metal craftsman of Japan. Yoneda Bisho won many prizes at the Nitten exhibitions, including a prize at the 5th Nitten in 1949 with the present bronze vase. He was born in 1929 in Takaoka City, Toyama prefecture, as the fourth son of a metalworking business family. He graduated from the department of metal crafting at the Takaoka Art and Craft High School in 1945. He was instrumental in establishing the Sōkōgeikai (Creative Art Craft) association in 1952, which was established by the young emerging craftsmen of the Takaoka region. In 1985 he became an official member of the Japan Art Crafts Association.