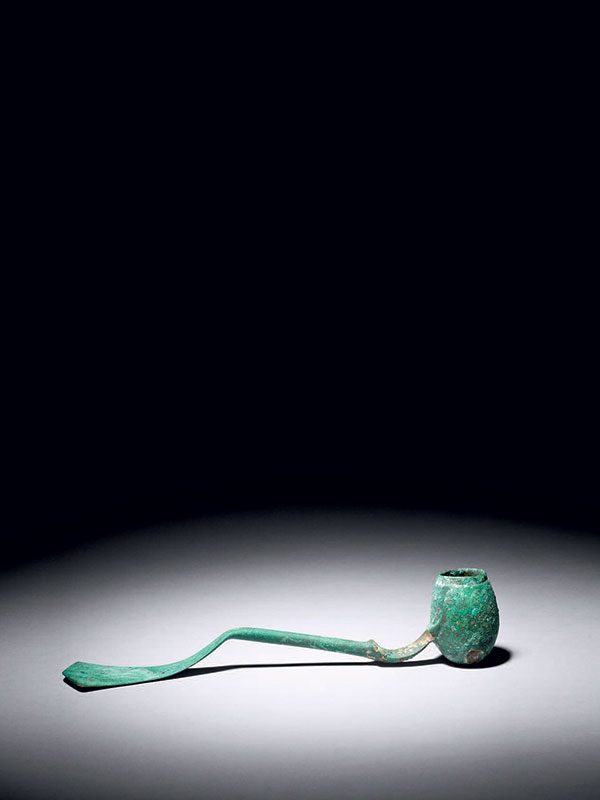 A bronze wine ladle, comprising a tulip-shaped bowl and a long handle, with a flared, curved end. A stylised ridge forms an angle near the quarter-section of the handle. The ladle is entirely undecorated and is covered in a green patina that has malachite inclusions all over.

This bronze wine ladle was possibly used in a worshipping ceremony during which libations were poured out. This kind of ladle or small dipper is usually called a dou in classical texts, given its name to the Northern Dipper (Beidou), a group of stars in Ursa Major which are still worshipped by the Chinese on the fifteenth day of the eighth lunar month.[1] Bronze ladles first appeared in the Yinxu period (16th century – c. 1046 BC), and continued into the Western Zhou dynasty. They are often found in archaeological excavations together with wine containers such as gong, you, lei or zun, demonstrating that such ladles were used for getting the wine out of the vessels. A bronze wine ladle very similar in design, dated to the Western Zhou dynasty, is in the collection of the National Palace Museum, Taipei.[2] Two other similar Western Zhou bronze ladles were discovered together with bronze wine vessels: one was unearthed together with a bronze you at Henan province in 1961, and both are now in the collection of the Henan Provincial Museum.[3] The other bronze ladle, together with a bronze gong, is in the collection of the Shanghai Museum.[4] A further comparable example is in the Meiyintang collection.[5]