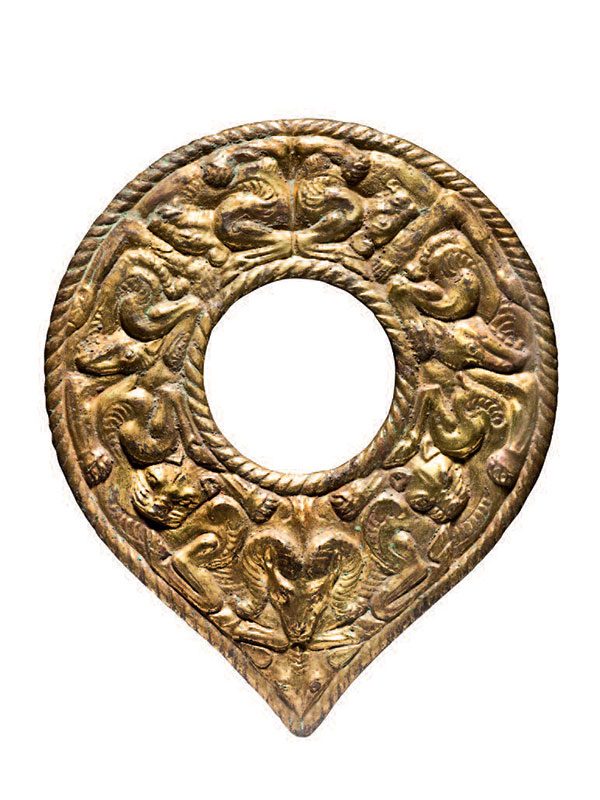 A giltbronze harness ornament of teardrop shape, which ends in a point at one side and has a central aperture. The main decoration consists of a low-relief frieze of intricately wrought animals, some with tiger heads, others with bird’s heads, locked in combat. The frieze is centred on a ram’s head with curled horns, above the head of a rodent-like animal with pointed ears. The edges of both the outer and inner rim of the plaque are cast in imitation of twisted rope. The back of the ornament shows the heavily corroded remnants of two fastening brackets. The front is covered in a thick layer of mercury gilding.

This extremely sophisticated giltbronze harness ornament with its zoomorphic motifs was possibly used as a horse’s headpiece, known as dang lu in Chinese. Several known metal horse’s headpieces of similar reverse teardrop shape can be compared to the current example: three plain bronze pieces, dated to the Spring and Autumn (770 – 476 BC) and to the Warring States periods, are in the collection of the Tokyo National Museum.[1] However, the unusual, complex animal-combat design seen on the present example is of ‘Ordos style’ and further reveals its origin. Ordos bronzes, such as belt plaques and weapons, were made for the many pastoral tribes living along the northern frontiers of ancient China during the Eastern Zhou (770 .221BC) to the Western Han periods. Within each geographical region the various tribes developed their own artistic vocabularies, which were primarily zoomorphic and richly adorned scenes of animal and human activity, reflecting the mythology and lifestyle of their tribal owners.[2] A pair of gold belt ornaments of closely comparable Ordos style, similar in the symmetrical animal-combat design, including tigers, birds, the centred ram’s head and the twisted.rope edge, was excavated from tomb 30 at Xinzhuangtou, near Yu county, Hebei province.[3] The excavation revealed a large workshop area for manufacturing bronzes, iron weapons, mirrors and gold ornaments.[4] The closely comparable style and design of the pair of gold belt ornaments and the present horse’s headpiece suggests that the present example was possibly cast at Yanxiadu, which appear to have made luxury items for nomadic consumption.