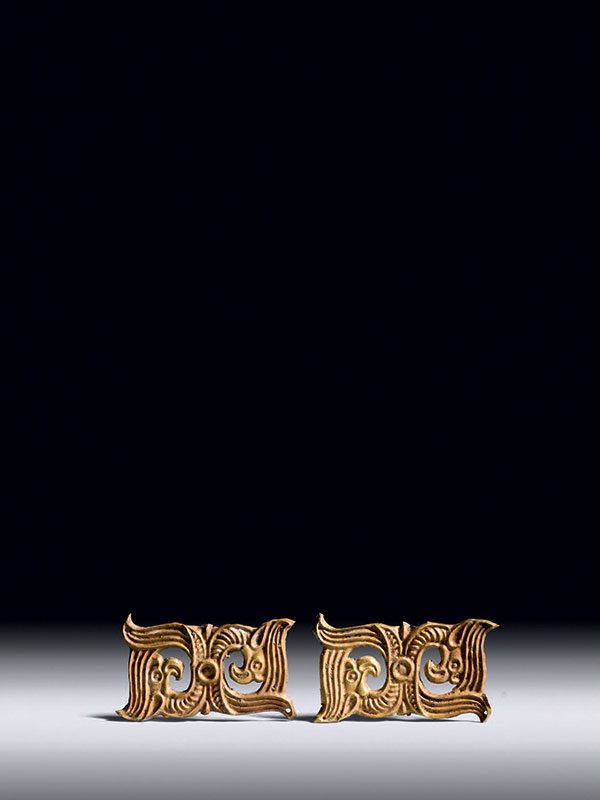 Two sheet-gold ornaments, each in the form of two confronting coiled raptors, shown in profile with curved beaks and horns and centred on a small circle in the middle. The plaques are carefully worked in repoussé with longitudinal ridges. The four corners of each plaque are pierced to enable attachment to another material.

These exquisite gold ornaments were probably originally attached to a belt that belonged to a member of the Xiongnu, a tribe of nomads who dominated the Asian Steppe. A great number of bronze plaques with animal designs, known as Ordos bronzes, were unearthed from Xiongnu tombs in northern China that are dateable to the Spring and Autumn period (770 .476 BC) and to the Han dynasty (206 BC .220 AD). Gold plaques were found in Xiongnu tombs of the Warring States to Western Han periods in Eerduosi (or Ordos city), Inner Mongolia, as well as in Warring States period tombs in Guyuan, Ningxia province.[1] A belt plaque with confronting bird heads in all the four perforated corners, excavated from a Xiongnu tomb of the Spring and Autumn to Warring States periods in Qingshui, Gansu province provides a close stylistic comparison to these plaques with a bird-head design.[2] Bunker states that the conventionalised designs of the plaques: “…can ultimately be traced back to bird images found on Western Zhou ritual vessels.”[3] A set of six sheet-gold belt ornaments of closely comparable style and design and dated to the Warring States period, is in the Chen Xun Tang collection in Hong Kong.[4] Four further closely comparable sheet-gold belt ornaments are in the Mengdiexuan collection.[5] A group of tinned bronze plaques of similar design, dated to 4th century BC, is in the collection of Eugene V. Thaw.[6]