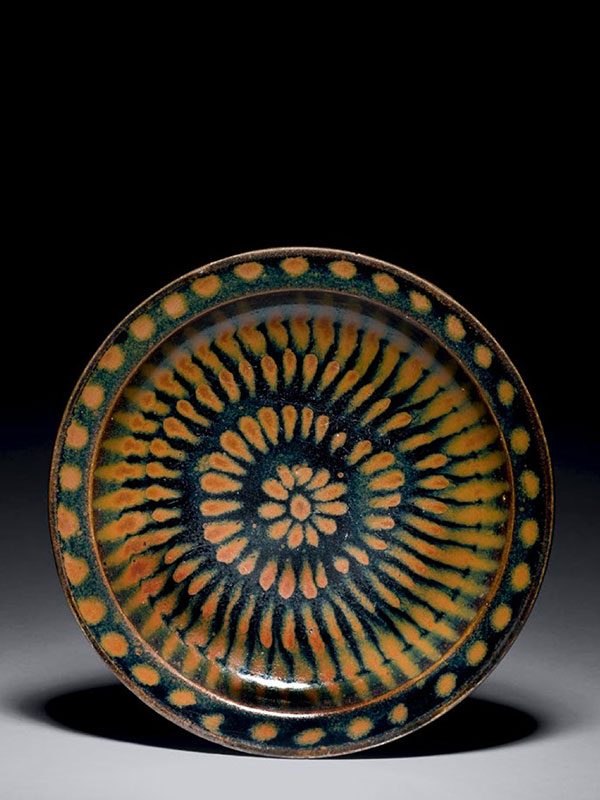 A circular stoneware dish of Cizhou type, supported on a ring foot, the rounded sides with a flat everted rim.  The interior is painted with three neat concentric rows of russet splashes, arranged in a circle around a central design of a flower head, all on a black ground. The rim has a decoration of a row of russet dots.  The exterior of the dish is covered in layers of brown and black glazes, leaving the foot unglazed and exposing the fine stoneware.  The base is partly covered in a thin layer of black glaze.

Streaked and russet patterned vessels were a staple of Jin dynasty dark-glazed wares and the neatly painted russet stripes on the present dish are a development of the more randomly applied russet splashes that can be seen on slightly earlier stonewares of the period.  The pattern of concentric russet stripes can be compared to that on a small jar in the Schatzman collection.[1] The pattern would appear to be rare on a dish; no other similar examples have been published. A number of deep bowls with a similar pattern have been published.  One such example, possibly made at the Guantai kiln site in Cixian, Hebei province, is in the collection of Robert Barron.[2]