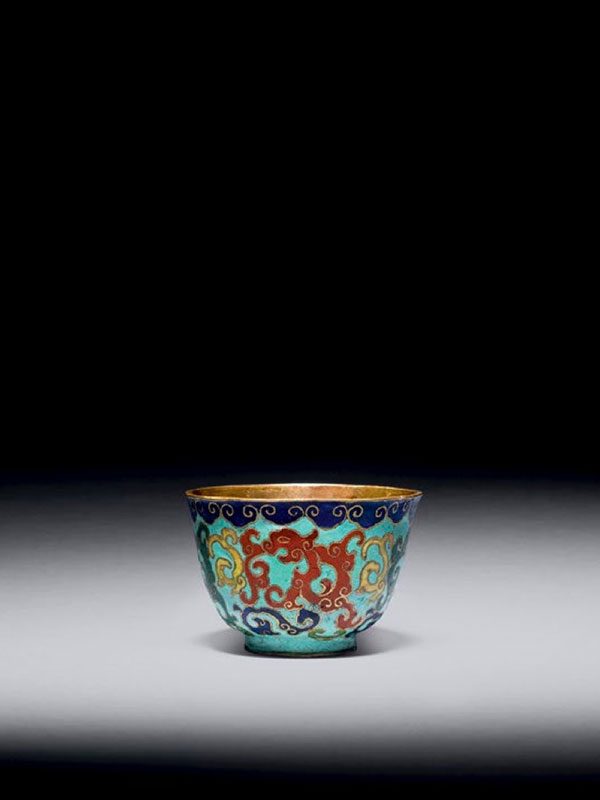 A small cloisonné enamel cup with a deeply rounded body and flared rim, supported on a short, straight foot. The side is decorated in coloured enamels on a turquoise ground with four abstract kuei dragons, which are alternatively filled in with red and green enamel. The rim is encircled by a band of ruyi pattern in lapis lazuli colour, whilst swirling cloud and tendril patterns in blue and yellow enamel fill in the ground. The interior and the base of the cup are unadorned, showing the brownish copper body with some areas of dark patina.

This fine cloisonné enamel cup reflects the fact that the application of enamelling techniques was widely applied on daily utensils. A slightly larger cloisonné enamel cup, decorated with two phoenix and peony flowers, and dated to the Ming dynasty (1368 – 1644), is in the collection of the British Museum.[1] Given its shape and colour combination, the present cup is more likely to be made later in the Qing dynasty.  A set of ten Qing dynasty small enamel cups, closely comparable in size and shape, is stored in a carved red lacquer box that was named by the Qianlong emperor ‘The Flying Dragon Banquet Box’ and is in the collection of the Palace Museum, Beijing.[2]