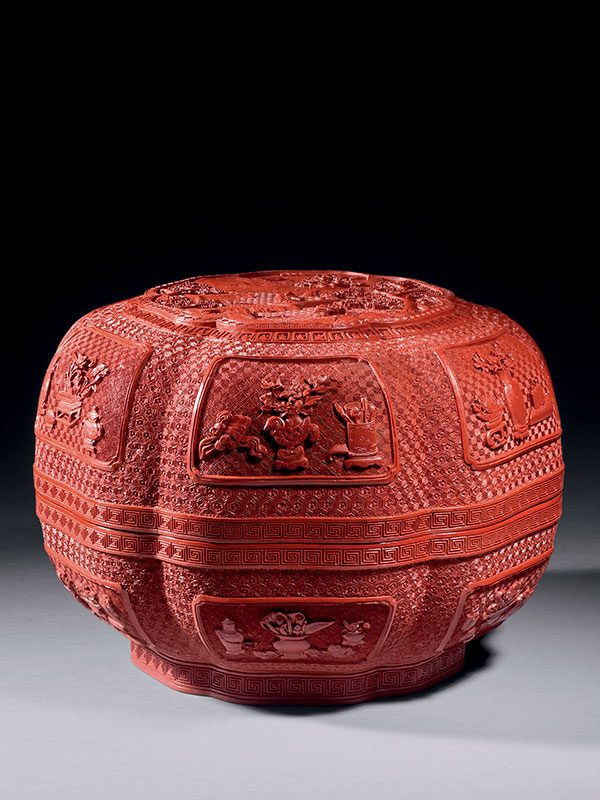 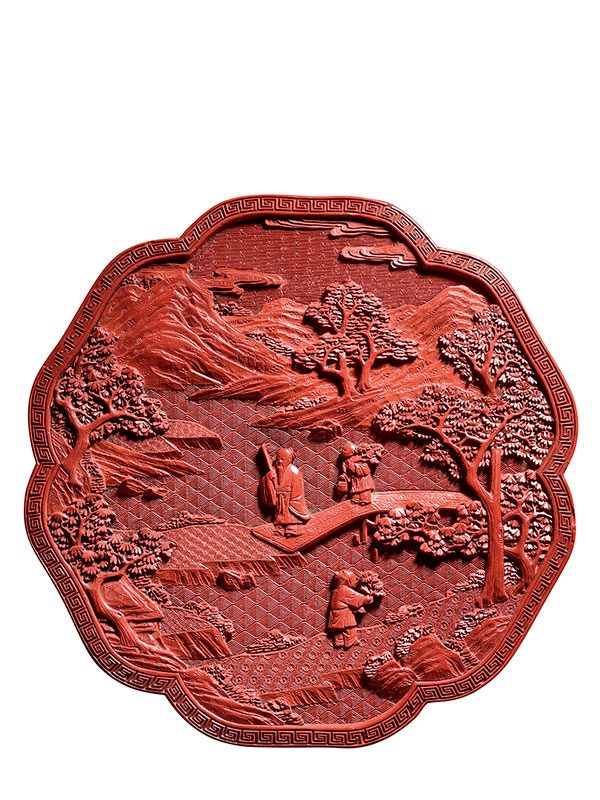 A large carved lacquer box of six-lobed form with domed lid and rounded sides, supported on a straight foot encircled by diaper pattern. The flat top is carved in low relief with three figures in a landscape setting. A long-bearded man crosses a bridge in a wooded river landscape, followed by a young attendant who carries a branch of chrysanthemums over his shoulder and a teapot in his right hand. Another young attendant, also carrying a branch of chrysanthemums stands on the riverbank.  The scene is contained within key fret and formal lotus panel borders.  The sides of both the box and the lid are each carved with six panels depicting various scholar’s objects, collectively known as the ‘hundred antiquities’. These include brush pots, vases, scrolls and paperweights, and all are depicted on a ground of hexagonal star burst diapers.  The rims of both the cover and the box are carved with a band of key-fret pattern. The interior and the base are lacquered in black.

This large lacquer box with its thick lacquer coating is delicately carved with panels displaying the ‘Hundred Antiquities’, a literary motif that was especially popular during the Qianlong period, which saw subjects from literature directly used for decorative motifs.  A Qianlong period cinnabar lacquer box carved with the ‘hundred antiquities’ on the sides and a scene of picking chrysanthemum (caiju) on the cover is in the National Palace Museum, Taipei, and is inscribed Cai Ju Bao He (‘treasure box of picking chrysanthemum’).[1] It brings to life a poem written by the Jin dynasty (265 – 402) poet Tao Yuen-Ming (ca. 365 – 42) and depicts a scene of picking chrysanthemum (caiju), derived from the first two characters in his well-known sentences “[ I ] pick chrysanthemums under the eastern fence, serenely [ I ] see the Zhongnan Mountains”(cai ju dong li xia, you ran jian nan shan). The present box, closely comparable to the one in the collection of the National Palace Museum, similarly shows an allusion to this poem. A very similar lacquer box, closely comparable in size, shape and design, is in the Chao collection.[2]