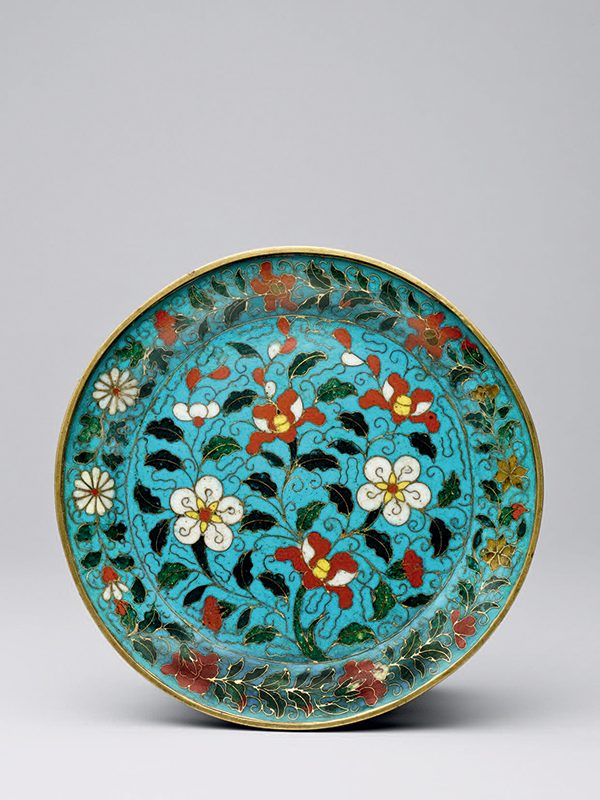 A cloisonné enamel dish of circular form with upturned rim, supported on three short  gilt bronze feet of cloud-scroll shape. The interior of the dish is decorated in brightly coloured enamels on a turquoise ground with three red hibiscus flowers and two white plum blossoms between green leaves. The rim has a continuous garland of stylised flower heads including red hibiscus, white chrysanthemums and small yellow flowers with green leaves on a turquoise ground. The reverse of the dish is undecorated.

During the 16th and 17th centuries many cloisonné enamel saucers were converted  into candle stands, at which time feet were added to the base.[1]  This is the case with the present, exquisite dish.  A closely comparable cloisonné enamel dish on three feet, also converted into a candle stand and decorated with three egrets on a shore, is in the Pierre Uldry collection where it is dated to the first half of the 16th century.[2]  Garner illustrates a dish from the Kitson collection that is comparable in the floral decoration on the rim.[3]  A further comparable example, the base incised with a reign mark of the emperor Wanli (1573 ­ 1620), is in the collection of the Palace Museum, Beijing.[4]