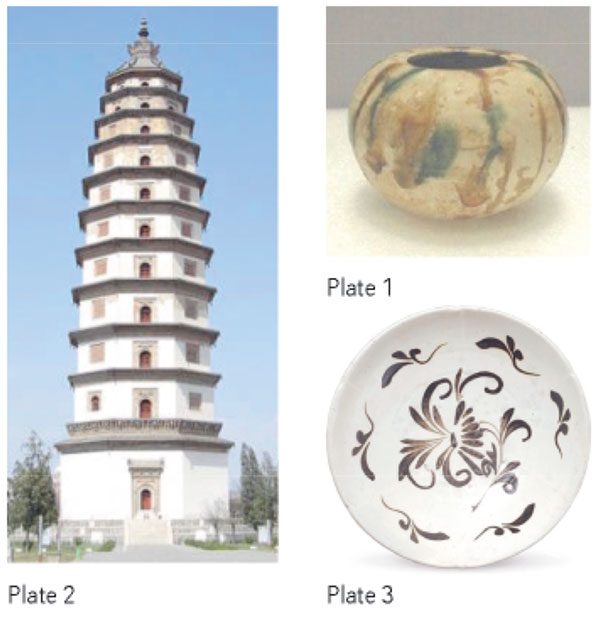 Five stoneware miniature ceramics comprising a pair of so-called ‘ear cups’, both with flat handles to either side and covered in a crackled cream glaze. A sancai bowl, the deeply potted sides curving slightly inwards and the top half covered in splashed cream, green and brown glazes. A ding-type model of a pagoda, supported on a hexagonal base, with a low aperture and a typical ringed top. A cizhou plate with everted rim and painted with three stylized floral sprays.

These charming Chinese miniature ceramics might have been made to show what a potter was capable of. They are exceedingly rare in Chinese ceramics. The ear-cups date to the Han dynasty (206 BC – 220 AD). The shape is known in all sorts of materials, including metal, jade and lacquer. On full -size examples, the ‘ears’ or handles enabled the user to hold the cup firmly. A miniature pottery ear cup from the collection of Dr Paul Singer, covered in a Yue glaze was exhibited in New York in 1977.[1] The sancai bowl is also a perfect miniature example of a full -size bowl; both the shape and the glazing correspond to what one would see in the original. A similar miniature sancai “alms” bowl is in the collection of the Yale University Art Gallery (plate 1).[2] Another example is in the collection of Arthur M. Sackler and was included in the 1977 exhibition in New York.[3] It is recorded that a white pagoda measuring 8 meters in height; was erected at Liaodi Kaiyuan monastery in Hebei province during the Song dynasty (plate 2). It is tempting to speculate that this Song dynasty ding-type miniature example could be a small model of the Liaodi pagoda. Finally, a full-size cizhou bowl with very similar decoration was formerly in the collection of Robert Hatfield Elsworth (plate 3). A miniature cizhou jarlet, painted with a comparable floral design, was included in the 1977 exhibition Early Chinese Miniatures in New York.[4]

Provenance: The collection of Louise Hawley Stone (1904-1997), Toronto, Canada. She was the Royal Ontario Museum’s first volunteer and was also a major donor, fundraiser, Board member and committee chair. The cizhou plate bears her collection label.