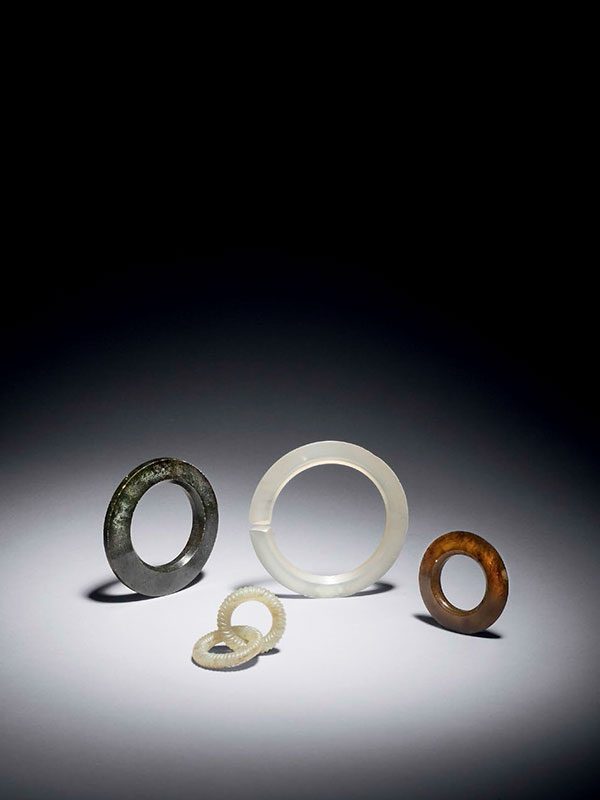 Four circular hardstone discs, each with a round hole cut to the centre, leaving apertures of varying widths. The largest agate slit ring is of translucent creamy white colour, while the inner edge is composed of two faceted planes, the sloped surfaces terminating into a pointed outer edge. The dark green moss agate ring similarly has two faceted planes on its inner edge, whilst the surfaces gradually terminate into a vertical plane. The brownish, semi-translucent agate ring also has an inner edge of two faceted planes and a pointed outer edge. The smallest piece is carved from celadon, pale-green colour jade into a set of linked double rings. The surfaces of the rings are finely carved with parallel grooves. All pieces are smoothly polished, with some traces of calcification.

The four pieces represent different types and forms of hardstone discs across the long history of Chinese culture. Slit rings, known as jue in Chinese, are found in the Hongshan culture (c. 3500 – 2000 BC) of the late Neolithic period and were still in use during the Warring States period (475 – 221 BC). The slit design indicates that they were probably worn as earrings.1  Comparable slit rings dated to the Hongshan culture are in the Taoshi Zhai collection.2   The dark green moss agate ring and the brown agate ring possibly formed part of larger pectoral sets of rings. A slightly larger moss agate ring, comparable in size, colour and design, dated to the Warring States period, is in the collection of the Museum of East Asian Art, Bath, England.3  A set of Warring States period moss agate rings of various sizes and a brown agate ring are in the Taoshi Zhai collection.4 The set of linked double rings is carved with parallel grooves, known in Chinese as jiao si, literally meaning ‘wrung silk’. This decoration appeared on single-ring discs during the Zhou dynasty (c. 1046 – 221 BC).5 The design of linked double rings became popular during the much later Qing dynasty (1644 – 1911). A set of celadon jade linked double rings, dated to the Qing dynasty, is in the collection of the National Palace Museum, Taipei.6