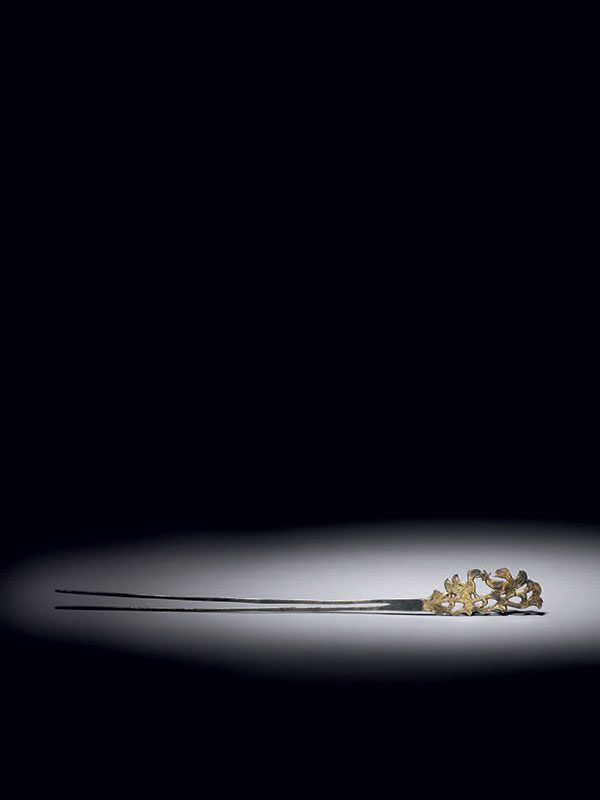 A silver hairpin with long, bifurcated silver prongs and an openwork gilded finial, which has a design of two mandarin ducks. The two mandarin ducks face each other and stand among floating tendrils, with their wings spread and the details minutely incised. The front of the finial is gilded, whilst the rest of the hairpin is plain and unadorned. The hairpin is contained within a Japanese wooden box.

This delicate silver hairpin, cut from a thin sheet of silver and with its tips beveled to points, is made in the style that was popular during the late Tang dynasty.[1] The handsome mandarin ducks stand for an affectionate couple living in harmony, and are thus popular motifs for wedding paraphernalia.[2] A closely comparable silver hairpin with a gilded finial embellished with two mandarin ducks facing each other among floral scrolls is dated to the late 8th – 9th century and is in the collection of the Art Museum, Princeton University.[3] A pair of silver hairpins with gilded finials and adorned with two phoenixes, also dated to the late 8th .9th century, is in the Crocker Art Museum.[4] Two further comparable Tang dynasty silver hairpins, one decorated with a pair of phoenixes and the other with two mandarin ducks, are in the Muwen Tang Collection.[5]