A pair of silver and parcel-gilt spoons 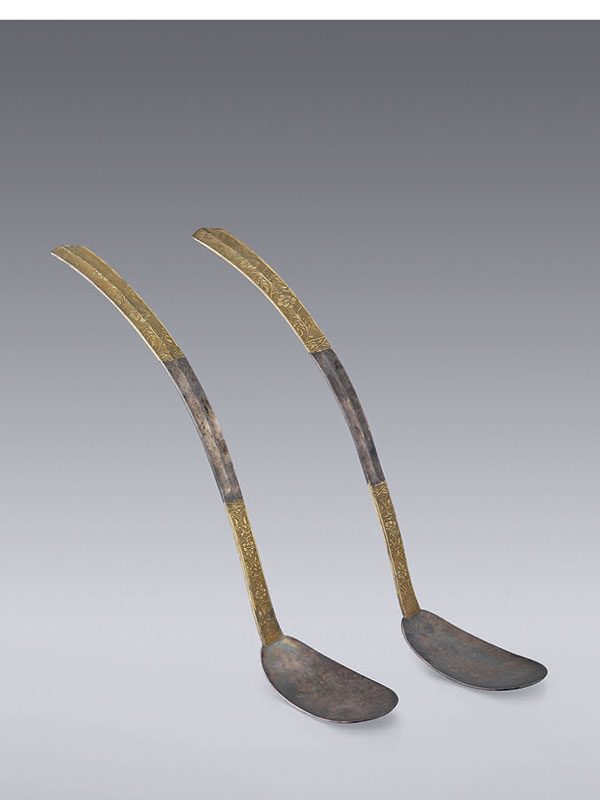 A pair of silver spoons, each with an oval-shaped, paddle-like bowl and a long curved handle with a raised ridge in the middle. Either end of the handle is embellished with a parcel-gilt decoration and engraved with minute floral and leaf patterns. Two characters, chang sheng (‘longevity’), are inscribed on the back, upper section of both handles.

This type of spoon was possibly used for measuring tealeaves when making tea, hence they tend to come with a specific name known as ‘tea measure’; cha ze. According to Chajing (Tea Classic), the first monograph on tea in the world written by Chinese author Lu Yu in 758 AD, “one ‘ze’ of tea (a spoon of cha ze, ‘tea measure’) should be added to a litre of water, for a perfect blend.” [1] A slightly smaller silver spoon with a similar parcel-gilt design was unearthed from a hoard found at Famen Monastery Pagoda together with other silver and gold tea utensils.[2] Those tea utensils, stored in the Famen Monastery Pagoda in the fifteenth year of the Xiantong reign (874 AD) of the Tang dynasty, either belonged to members of the imperial family and the Emperor Xizong, or were commissioned by them to be presented to the monastery as offerings to the Buddha. These objects not only serve as material proof of the close relationship between Buddhism and tea drinking, but also show the important role given to the preparation and serving of tea in Buddhist ritual.[3] Another Tang dynasty gilded silver spoon with closely comparable flower and grass design was excavated at Beiyin village, Yaoxian in Shaanxi province in 1958, and is now in the collection of the Shaanxi History Museum.[4] Two other comparable Tang dynasty bronze spoons were included in the 1999 exhibition Tin-bronze of China at the Kuboso Memorial Museum of Art in Izumi, Japan.[5]