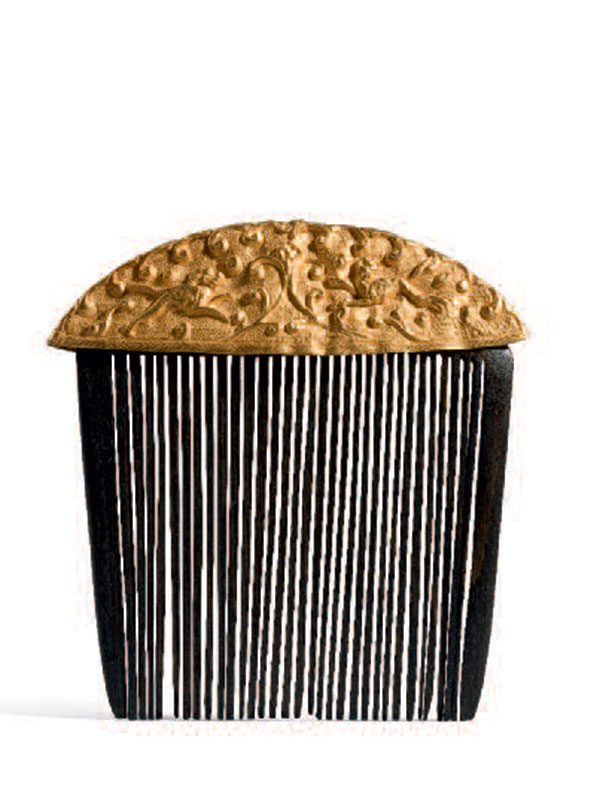 A round-backed gold comb top decorated with a repoussé design of two leaping tigers on one side and of two birds in flight on the other. The design is set against a background of tiny, finely punched circles and a stylised foliate pattern. The straight lower rim of the gold comb is decorated on both sides with a thin band of hatched markings resembling arrowheads.

The use of gold in China’s long history can be dated back as early as the Bronze age. According to White, the Chinese used combs of this basic shape as an ornament to keep hair in place as early as the Warring States period (475 – 221BC).[1] It was not until the Tang dynasty that the use of combs, zhi or shubi in Chinese, became more common and in vogue.[2] The repoussé design on this comb top, created by working the metal from the back, resulting in a relief design on the other side, is executed with great control and attention to detail. While some extant gold combs incorporate purely ornamental design, such as an example from the Pierre Uldry collection, now in the Rietberg Museum in Zurich,[3] other examples show a combination of animal and floral motifs, such as a gilded silver comb from the Mengdiexuan collection, also dated to the Tang dynasty.[4] A gold comb top of almost identical form and size but with a purely floral design motif is in the Simon Kwan collection.[5] An example of identical size, form and decorative design but with lions rather than tigers and birds among foliage, is in the Minneapolis Institute of Arts.[6]