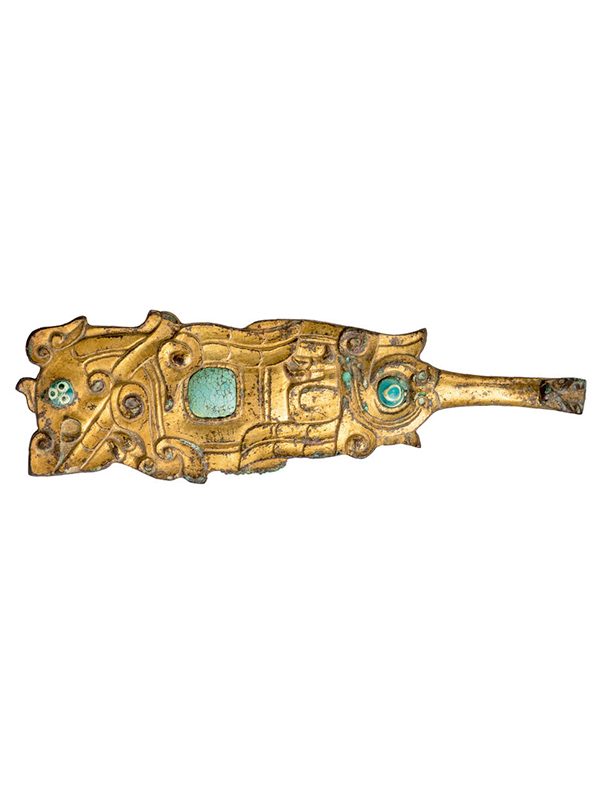 A gilt bronze belt hook, the wide, flat section cast in relief with a complex pattern of an archaistic tiger-like animal in profile, which has pronounced features including an ear with long Iobe, a curled-up nose, wide-open jaws with curved fangs and an eye inlaid with a composite glass bead. The centre of the plaque is inlaid with a turquoise cabochon, and the end nearest the hook is fitted with another glass bead. The long hook terminates in a small animal’s head. The bronze retains most of its original gilded surface, also on the back.

Bronze belt hooks were used in China from very early times. They allowed the wearer to express his individuality and compelled artisans to produce increasingly complex and sumptuous pieces, as can clearly be seen in this richly adorned and inlaid example. Stylistically, the compactness of the design has much in common with that found on contemporary carvings in jade, such as a pair of plaques in the Freer Gallery, Washington.1 The use of glass inlays can be considered an innovation, since glass was first made in China during the Warring States period. A near-identical belt hook, the end missing, is in the collection of the Museum of Far Eastern Antiquities, Stockholm.2