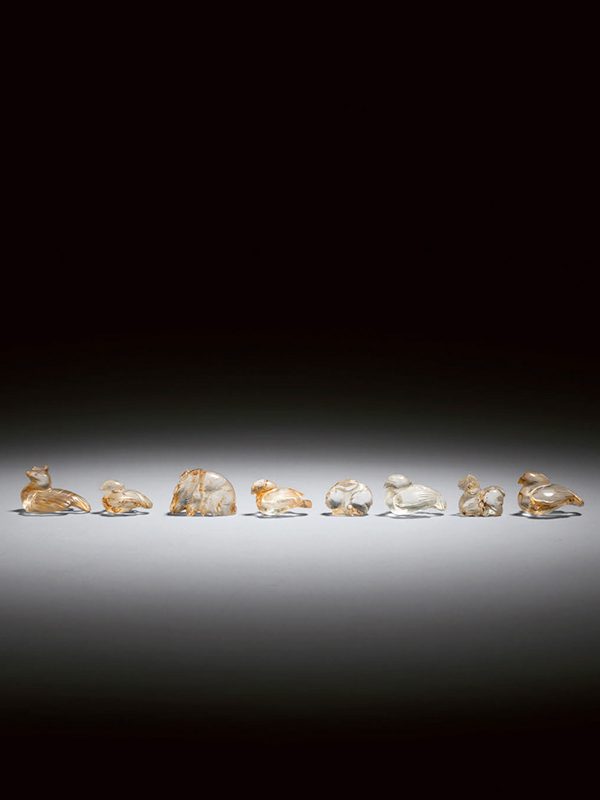 A group of eight miniature animals carved from rock crystal, comprising a phoenix with outstretched wings, a crouching bear, a ram, a rabbit and four birds. The animals are realistically carved and each is drilled through. On all animals the clear crystal has some rust markings, presumably due to them having being in dose proximity to metal objects.

The rock crystal used to carve these charming miniature animals is very fine, pure and colourless, a typical characteristic of the high quality stone found during this period.1 Rock crystal is traditionally valued for its translucent quality as a symbol of purity, and is referred to as shuijing, literally meaning ‘water essence’.2 The use of small, carved objects such as these was popular from the Western Han dynasty (206 BC – 9AD) onwards, mainly serving a personal ornamental purpose of necklaces or bracelets. Two comparable rock crystal miniature rams form part of a necklace that was excavated from a Western Han dynasty tomb at Huchang, Yangzhou, Jiansu province, and are now in the collection of the Yangzhou Municipal Museum.3 Examples of closely comparable miniature rock crystal animals of a ram, a bear and a phoenix are in the Liu Family collection.4 Two slightly larger Western Han dynasty jade carvings of a bear and a hawk, comparable in design, were excavated from the Weiling Mausoleum, Xiayang, Shaanxi province, and are now in the Xianyang Museum.5