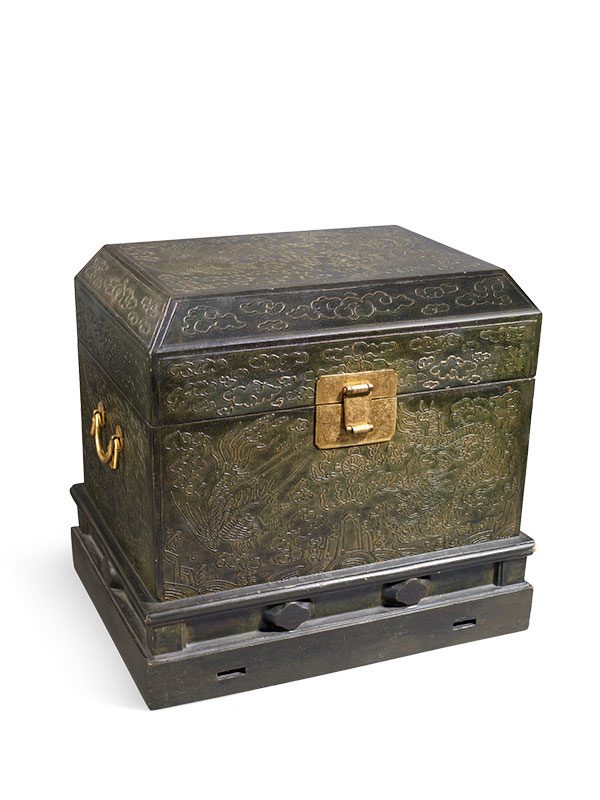 A green-lacquered wood chest of rectangular proportions, supported on a pedestal base. The box and the domed top are carved all over in low relief with scenes of a phoenix and a dragon, pursuing a flaming pearl through cloud scrolls. The chest has bail handles on the sides, an elaborate lock at the front, finely engraved with further phoenixes and dragons, and two hinges at the back, engraved with cloud scrolls. All the metal elements are gilded. The interior of the chest is lined in yellow silk. The base is pierced with four horizontal slots to accommodate cloth straps. A (probably spurious) paper label inside the chest, painted with seven characters, reads Xiao Yi Ren Huang Hou Yu Bao, which translates as ‘Precious treasure of the Empress Xiaoyiren’.

In Chinese symbolism, the phoenix (Feng) and the dragon (Long) appearing together present happy omens, (longfeng chengxiang).[1]   In ancient days, the phoenix represented the Empress and the dragon the Emperor, so it seems likely that this travelling chest was made for robes, in this case probably imperial robes. Empress Xiaoyiren was one of the wives of the Kangxi emperor, who reigned from 1662 – 1723. She died in 1689.