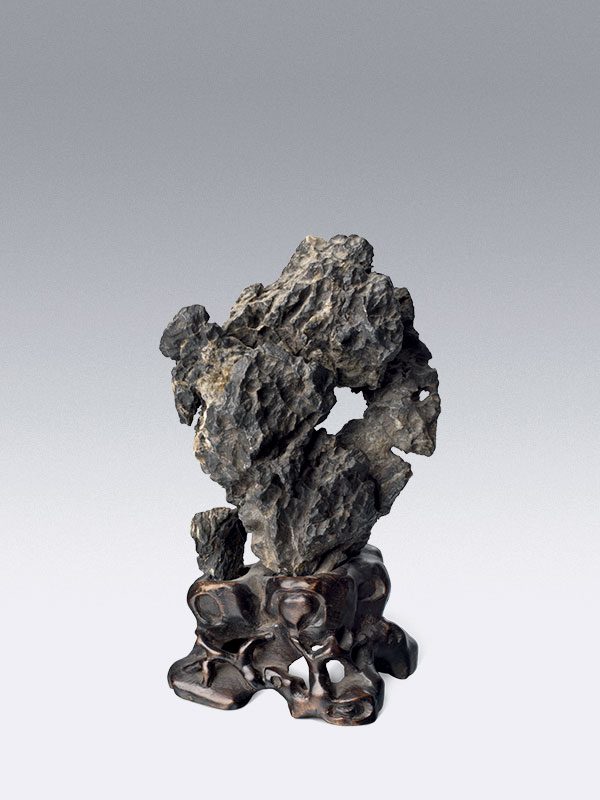 A limestone miniature rock formation, consisting of a larger rock with a central aperture and a very small rock by its side.  Both rocks are fitted to a carved wood stand, which is original. The material is of a dark grey, almost black colour and has some pale grey striations and exudes a distinct metallic tone when struck.

In China, Chinese Scholars’ Rocks or Spirit Stones are called Gongshi, naturally formed or “sculptured” stones in surprising shapes and textures. Gongshi have been appreciated by Chinese connoisseurs for more than a thousand years. As early as the Tang dynasty (618-907) scholar-officials and persons of refined tastes began appreciating their unusual forms by placing smaller sized rare rocks in their studios for indoor viewing. To Chinese scholars, these rocks represent a focus for meditation of religious or philosophic principles and serve for contemplation prior to writing poems or painting. Lingbi County, where this rock is from, is a county in the north of Anhui Province, bordering Jiangsu province to the north and northeast. It is under the administration of Suzhou city.  Scholar’s stones are generally karstic limestone. Limestone is water-soluble under some conditions, which is why the large “apertures” appear in the present rock.