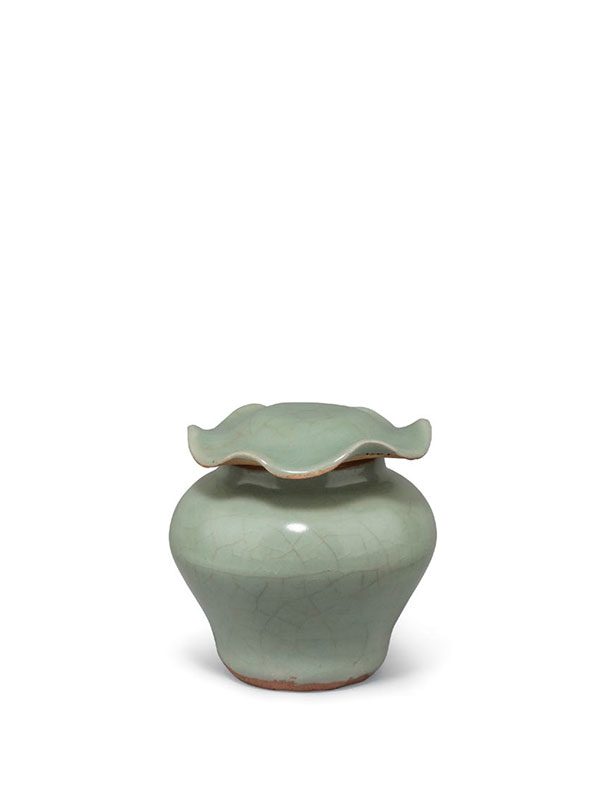 A stoneware jar with a compressed ovoid body, supported on a short, inverted foot, bulging out towards the short neck.  The slightly domed cover terminates in a wavy rim. The interior and exterior of the jar are covered in a translucent celadon glaze of bluish green hue. The underside of the cover and the foot rim are unglazed and reveal the orange buff stoneware body.

Small celadon jars of an elegant and simple design, such as the present example, were produced at the Longquan kilns in southern Zhejiang province. Jars that were made with a cover with either lobed lips or foliate divisions are called heyeguan (meaning ‘lotus-leaf jar’) in Chinese. They were principally made for export to other parts of Asia. The distinctive bluish-green colour of the glaze that characterises longquan wares is primarily attributable to the smoky firing technique employed at the kilns, which converted the small amount of iron present in the glaze into ferrous oxide.1 A closely comparable Yuan dynasty longquan celadon jar of similar shape, but much larger in size, was excavated from Yiwu city, Zhejiang province in 1975 and is now in the collection of the Yiwu City Museum.2  Several other closely related longquan celadon jars of comparable size, shape or style are dated to the 14th century of the Yuan dynasty and are respectively in the collections of the Victoria and Albert Museum in London,3 the Ashmolean Museum in Oxford,4 the Museum of East Asian Art in Bath5 and the Meiyintang collection.6