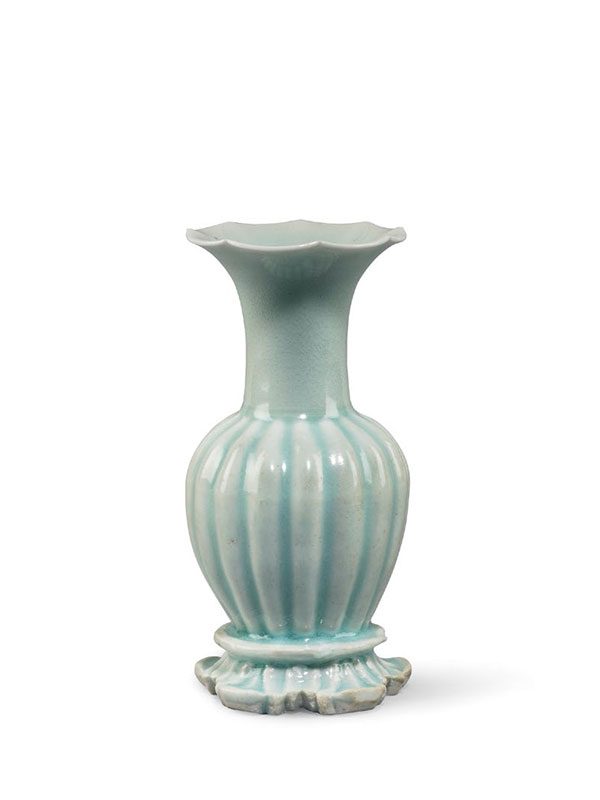 A porcelain vase of baluster shape, the lobed sides rising upwards from a splayed, petal shaped base, curving in towards the shoulder and surmounted by a flaring neck with a lobed rim. The vase is covered in a pale bluish glaze, which pools in the grooves to an aquamarine tone. The base is unglazed, exposing the white porcelain body underneath and has some characteristic firing marks.

This elegant vase is a fine example of Song qingbai ware, both for its simplicity in shape and its well-proportioned body. The earliest ceramics identified as qingbai ware were produced in the late 10th century at Jingdezhen (also known as Raozhou) in Jiangxi province.  Hutian was the main kiln site in Jingdezhen during the Song dynasty and produced the best of the pure white-bodied porcelains covered with a transparent, icy blue-tinged glaze. The distinguished Southern Song (1127 – 1279) ceramic historian Jiang Qi praised qingbai wares and recorded their popularity contemporaneously known as Raoyu, ‘jade of Raozhou’.1  A closely comparable Song qingbai porcelain vase with similar lobed body and rim, excavated from Hutian kiln at Jingdezheng in 1966, is now in the collection of the Jingdezheng Porcelain Museum.2 Some similar examples, of comparable shape and style, all dated to the Song dynasty, are respectively in the collections of the British Museum,3 the Fitzwilliam Museum in Cambridge,4 the Asian Art Museum in San Francisco,5 and the Jianxi Provincial History and Ancient Ceramics Committee.6