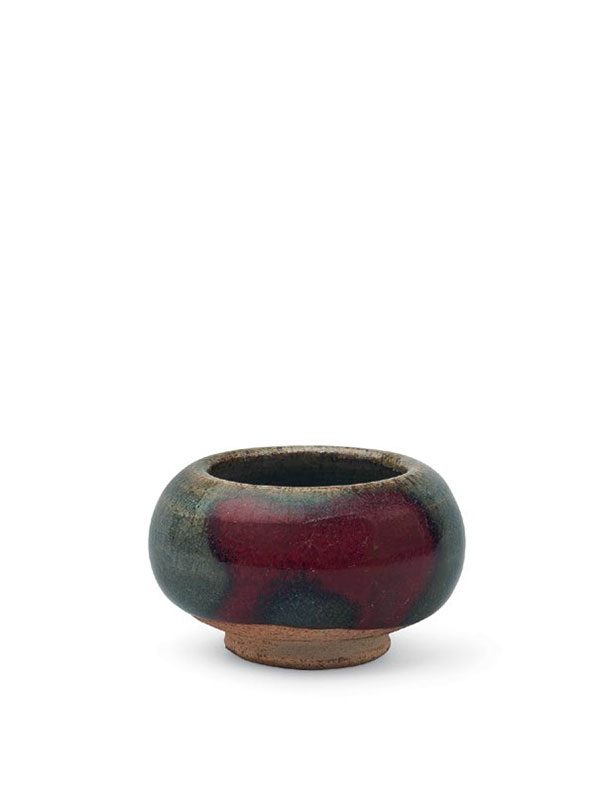 A small jun stoneware bowl supported on a low foot, the bulbous body curved in at the rim. The jar is covered in a thick, blue glaze that turns to a transparent olive green glaze at the rim. The exterior is enlivened by a single large splash of reddish purple. The glaze stops unevenly above the foot, showing the orange, coarse stoneware body.

The lustrous blue glaze of this bowl is characteristic of Jun wares, which were produced in the kilns of Henan province and the height of its production was during the Song dynasty (960 – 1279). The largest output of the Jun kiln was vessels used in ordinary life such as bowls, plates, washers, jars, censers, pillows and others.  According to the function of those vessels that were mainly used for daily life, they were customarily called ‘Minjun’, literally meaning ‘people’s Jun’.1  A comparable miniature Jun bowl, similarly decorated with purplish-red splashes and dated to the Yuan dynasty, is in the collection of the Palace Museum, Beijing.2 Another Jun piece of similar small size, dated earlier to the Northern Song dynasty (960 – 1127) and identified as a wine cup, was included in the 1986 exhibition Arts from the Scholar’s Studio.3