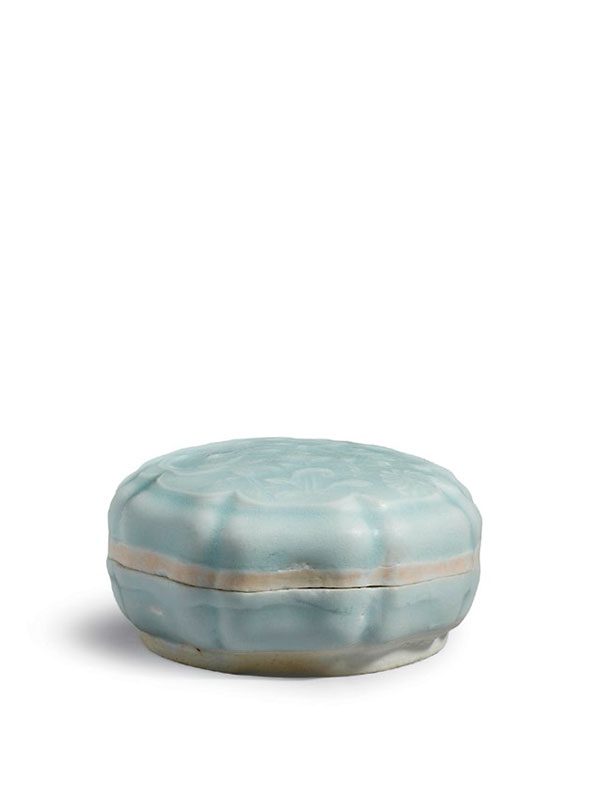 A qingbai porcelain box of eight-lobed form with a corresponding raised panel on the top. The slightly domed cover is mould-impressed in low relief with two cranes, standing looking at each other across a lotus pond. The feathers of the cranes and the flowering lotus, chrysanthemums and aquatic plants are vividly depicted in detail.  The box is covered in a thin, translucent pale blue glaze, leaving the rims and the base uncovered, revealing the sugary white body and some characteristic brown and black firing marks on the base.

Ding and qingbai wares are both considered white wares, but qingbai porcelain is the true white porcelain because of the sugary white and the translucent body.  Qingbai porcelains are fired in a so-called dragon kiln with wood fuels and the brown burn marks on the base are due to the re-oxidation process and iron impurities in the clay body.1 Cosmetic boxes of round shape are often formed with petal decoration on the sides, and there are many qingbai boxes from the Chai and Hutian kilns that display this feature.2 In Chinese pronunciation, the crane (he) is a pun for ‘together’ (he), as well as ‘box’ (he). The crane is one of the most popular birds in later Chinese art and one of the favourite symbols of longevity. However, this motif is seldom seen in Song ceramics. A 12th-century Ding bowl decorated with cranes either standing or flying in a lotus pond is in the collection of the Victoria and Albert Museum.3   A comparable eight-lobed qingbai circular box of smaller size and decorated in relief with a floral motif was excavated in 1952 and is now in the Chongqing City Museum in Sichuan province.4 Another small qingbai circular box, decorated with a pair of flying phoenixes on the cover, dated to the Southern Song period (1127 – 1279), is in the Muwen Tang collection.5