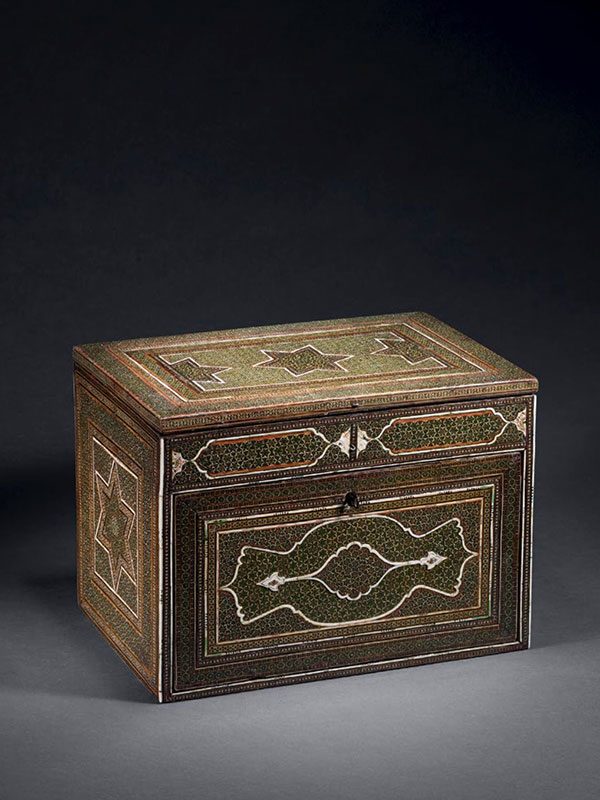 A micro-mosaic and bone-veneered wood cabinet of rectangular form. The inlaid bone and stained ivory decoration with star motifs on recurring polygonal geometric ground forms further stellar motifs.  The cover is inlaid with a six-pointed star, the back with a large lozenge pattern, all within rectangular borders. The flap front opens to reveal six drawers with similar decoration and a larger central drawer with a lozenge decoration. The top is also hinged and opens to reveal a painted compartmented interior.

The tradition for luxury objects begun by the Safavids in the 16th century continued under the Persian Qajars. The Qajar dynasty ruled Persia from 1781 to 1925.  The technique of micro-mosaic, khatamkari, was fashionable during this period. Khatamkari is a highly elaborate process; in each cubic centimetre of inlaid work, up to approximately 250 pieces of metal, bone, ivory and different kinds of wood are laid side by side, glued together in stages, smoothed, oiled and polished. Woods used include betel, walnut, cypress and pine. This technique was used for a number of precious objects including doors and windows, mirror frames, Quran boxes, boxes, pen and penholders and lanterns.