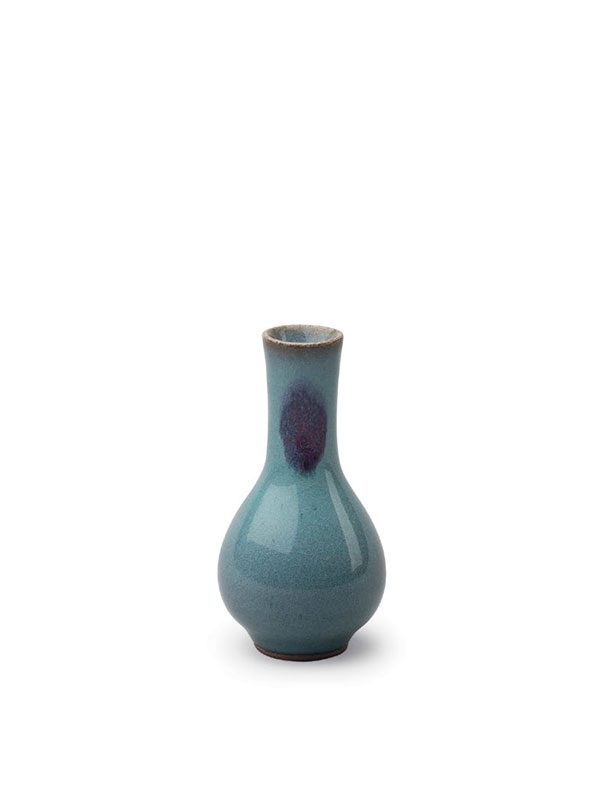 A small Jun-type stoneware vase supported on a low foot, the rounded body extending towards a long straight neck and terminating into a slightly splayed rim. The vase is covered in a lustrous sky-blue glaze, with a band of olive green glaze at the rim. The exterior is enlivened by a single splash of reddish purple on the neck. The glaze stops neatly above the foot, revealing the dark brownish stoneware body.

The status of Jun wares, which were mostly made for popular use and were not widely collected before the late Ming dynasty, was elevated from the period of the Qianlong emperor (r. 1736 – 1795), who was an admirer of them and used them for decorating his domestic spaces. Some full-size Jun stoneware vases with a comparable glaze and of similar proportions are known. A closely comparable vase in proportion and also with a purple splash on its body, dated to the 12th century of the Song dynasty, is in the collection of the Victoria and Albert Museum.1  Two further comparable examples are respectively in the collections of the British Museum2 and the Palace Museum, Beijing.3 Such miniature form of Jun wares, however, were probably made later during the Qing dynasty for curio cabinets that were fitted out with a series of small compartments. A miniature Jun-type vase, similar in size and colour with a slightly wider proportioned body, is preserved in a Qing dynasty treasure box in the Qing Court collection, and now is in the collection of the National Palace Museum, Taipei.4