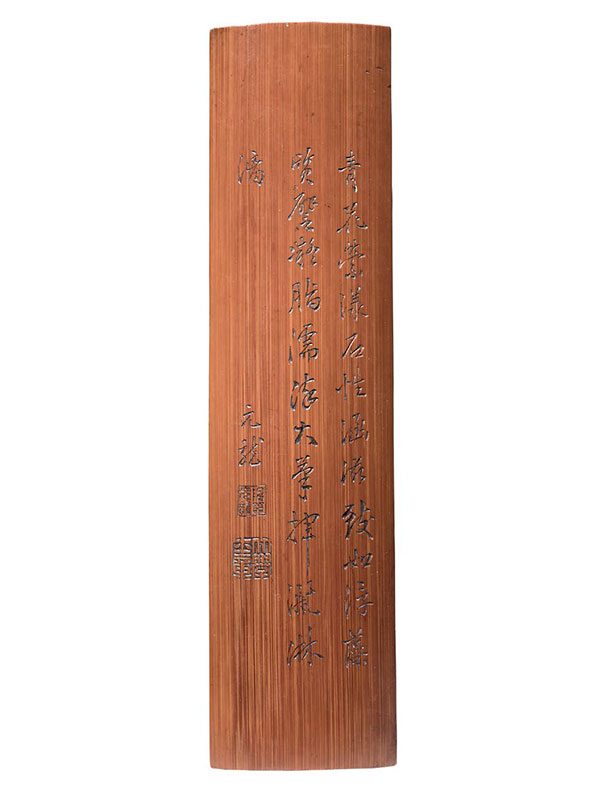 The 24-character inscription carved on the wrist rest is a poem to appraise ink stones, which can be translated as follows: “[The quality of the stone] has beautiful patterns, which look nourished and moisturised. [The texture of the stone] is like frozen fat. Ink brushes dip into the ink [on the ink stone], and then write freely without limitation.” The carver has attributed this piece to Chen Yuan Long, who became an official in 1685 after getting second place in palace examinations. A very similar Qing dynasty bamboo wrist rest, carved with the same poem and also attributed to Chen Yuan Long with the same two seal marks, was in the Mary and George Bloch collection, Hong Kong.1 This comparable example is further inscribed with an inscription on its reverse side, reading ‘purchased at Youyu Zhai (‘friends of the bamboo studio’) in Jiading (Jiangsu province) in the winter of the Guiyou year (1873) and inscribed by Eshi during a visit to Kunshan (Jiangsu province).’ This information tells us that the wrist rest in the Bloch collection was produced in Jiading, Jiangsu province, which was one of the main centres of bamboo carving and known as the ‘Jiading School’ for its famous ‘deep carving’. The present piece, with nearly identical inscription and carvings, might have been produced in Jiading, Jiangsu province as well. Other comparable bamboo wrist rests, dated to the Qing dynasty, are in the collections of the Shanghai Museum2 and the Victoria and Albert Museum.3