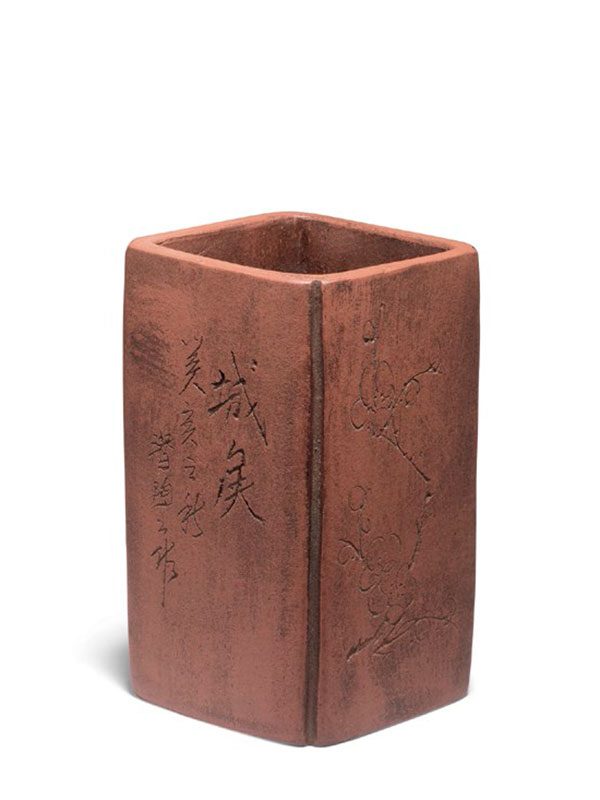 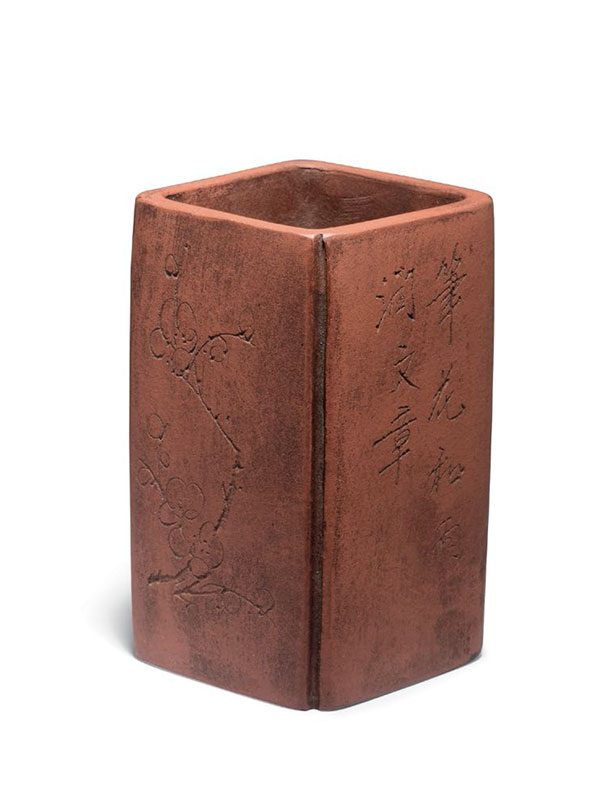 A pottery brush pot of square form with a slightly recessed base and straight sides. Two opposite sides are incised with a branch of plum blossom, whist the other two sides are decorated with different inscriptions. One side has a seven-character inscription Bi Hua He Yu Run Wen Zhang, literally meaning ‘pen, flower and rain would nourish an article’. The other side has three lines of inscriptions. The first line from the right has two larger characters, Cheng Mei (‘beauty of the city’). Following that are two larger characters, and a carved inscription mentioning the production year of this pot: in the autumn of the year of Kuei Hai (1923 AD). The last line is incised with the artist’s nickname Qian Tao Shi Zuo (meaning ‘made by Qian Tao’). A square seal mark impressed on the base reads ‘Tie Hua Xuan Zhi‘ (‘made by Tiehua Xuan’). The pot is of even colour in orange-red with purple hue.

Tiehua Xuan in Shanghai was established by Dai Guo Bao (1875 – 1926) in 1913 and still exists today. Tiehua Xuan produced items noted for the excellence of their calligraphic decoration.1  Due to the rapid development of the purple clay industry, shops were established in major cities from the 19th century, commissioning pottery wares from Yixing. However, each shop had its own artists to decorate them. The artist Han Tai (1864 – 1926), also known by his nickname Qian Tao, was a famous artist for incising pottery. Three comparable yixing pottery pieces are in the K.S. Lo collection at the Flagstaff House Museum of Tea Ware in Hong Kong. One yixing pottery teapot, of rectangular form and similarly incised with plum blossom branches and inscriptions to its sides, is dated to 1922.2 Two other pieces, both bearing a similar ‘Tiehua Xuan Zi’ shop mark in seal script, are dated to the early 20th century.3