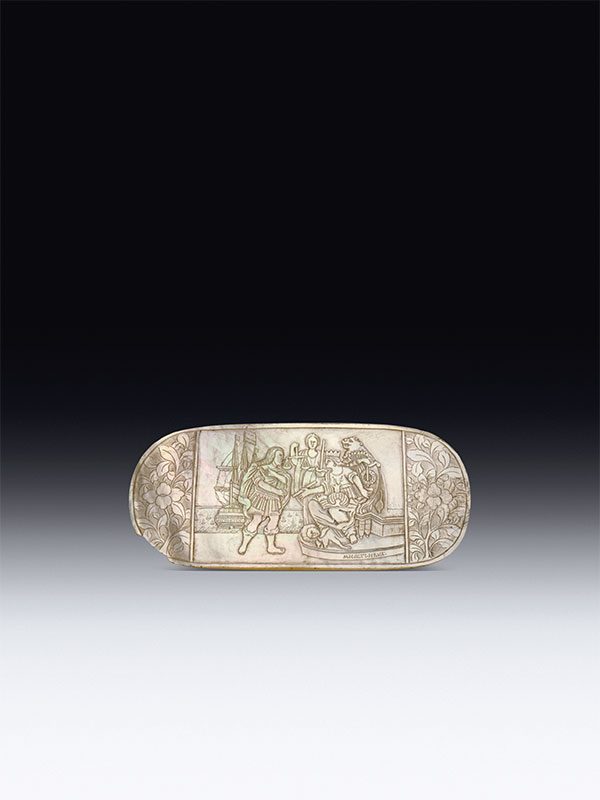 A mother-of-pearl plaque of oval shape, the central scene is carved in low relief showing a long-haired Baron van Imhoff, dressed as a Roman Emperor, receiving a scroll from a seated, crowned woman, whose costume is engraved with the V.O.C. emblem and who rests her feet on a recumbent human figure. Behind her are a figure of Justice, holding the typical sword and scales, and a lion holding a bunch of arrows. In the distance, to the left of van Imhoff, his ship can be observed. The central scene bears the signature M. Holtzhev.f and is flanked by two floral panels.

This unusual, translucent mother-of-pearl plaque was finely carved in China after a Dutch original and was most probably intended to serve as the lid of a silver snuffbox. Baron Gustaaf Willem van Imhoff (1705-1750) was appointed Governor-General of the Dutch East Indies in Batavia in 1742, after serving as Governor of Ceylon (Sri Lanka) prior to that. The allegorical scene carved to the centre of this plaque shows van Imhoff being presented with his commission as Governor-General by a seated, crowned woman, representing the V.O.C. (Verenigde Oostind ie Compagnie or United Dutch East Indies Company).[1] The plaque is signed in the bottom right­hand corner “M. Holtzhev.f” (M. Holtzhey fecit). Martinus Holtzhey was a German medallist who was born in Ulm in 1697 and died in Middelburg in 1764.  He was active in the Netherlands, working in the provinces of Holland, Gelderland and Zeeland as a medallist. The fact that this plaque was carved by a non-European craftsman, working after an original by Holtzhey, is also evident from van Imhoff’s ship, the stern of which is inscribed “Hetpoet.dr”. In fact, van Imhoff’s ship was called the “Herstelder”.