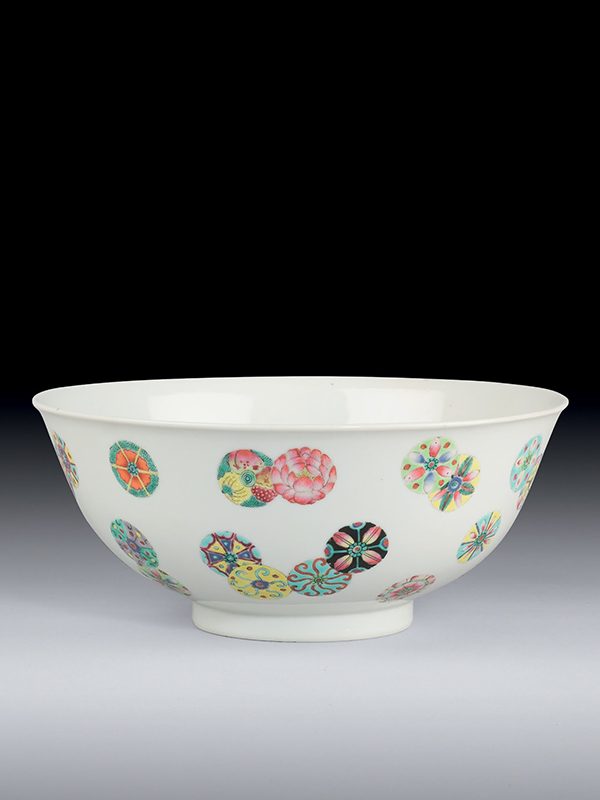 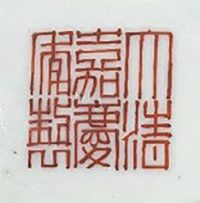 A large porcelain bowl, the deeply rounded sides rising from a short foot and ending in an everted rim.  The exterior of the bowl is covered in a white glaze on which scattered clusters of roundels, some representing formalised flowers or fruits, are applied in bright enamels.  The interior is covered in a plain white glaze. The base is painted in overglaze iron red with a six-character seal mark of the emperor Jiaqing.

This large porcelain bowl is a fine example of multi-coloured enamelled porcelain of the Jiaqing period. The seemingly random way in which the enamel roundels have been applied lends the bowl a distinctly non-Chinese air, perhaps tending more toward the Japanese taste. The use of colours and motifs shows great imagination: no two roundels are the same. This type of decoration can be seen on earlier porcelain; a jar with similar clusters of enameled stylised flowers, dated to the Yongzheng period, is in the Palace Museum, Beijing.1 The decoration of scattered flower and fruit roundels is seen also in other materials such as lacquer; a red lacquer case dated “Middle Qing Dynasty” with comparable decoration is in the Qing Court Collection.2