Pottery figure of a foreign groom with a pointed hat 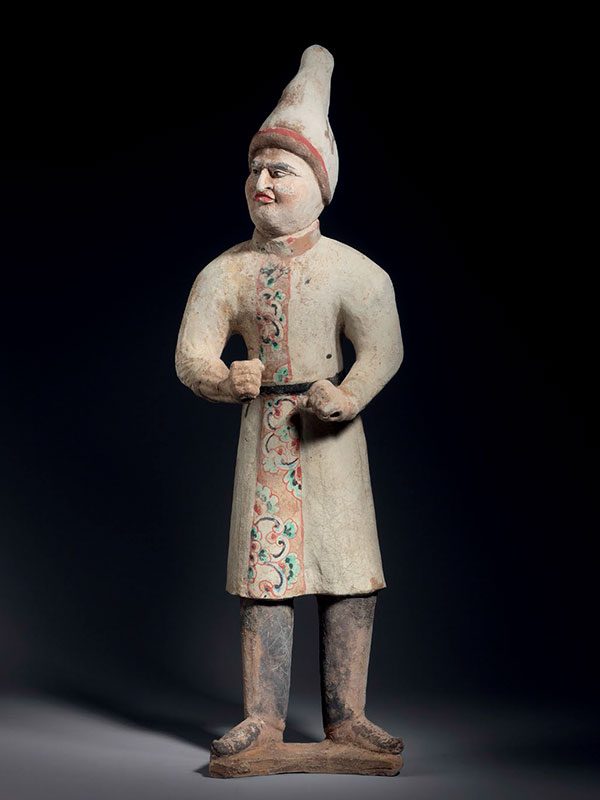 A large pottery model of a male groom of foreign appearance, standing tall and slightly turning his head towards the right. He raises both his arms up in front of his body with the elbows bent, and his hands are clenched strongly in fists, as if grasping something. The figure is dressed in long-sleeved, three-quarter length layered robes. The outer robe, which loosely drapes above the top of his flat pointed black boots, is tied with a black belt. Exceptionally, the white outer robe is adorned with a well-preserved vertical band painted in red, green and black pigments with scroll patterns. The same decoration is partially visible around his collar.  On his head he wears a pointed, red-rimmed cap adorned with two diamond-shaped patterns on either side. His arched eyebrows, bulging eyes, large prominent nose and fleshy lips define his animated facial expression and the face retains extensive remains of the original pigments.

The full and strongly defined facial features of this powerfully modelled figure indicate that he is of non-Chinese extraction.  The figure is highly unusual, if not unique, for the well-preserved coloured decoration of the robes and also for the uncommon hat. His hands are positioned as if holding a rope, indicating that the figure can be identified as a groom.  The tall pointed hat, which resembles the so-called Phrygian cap often seen in classical and early Christian art, is of non-Chinese origin, and is ultimately derived from the Middle East and Iran by way of Central Asia.1  A closely comparable pottery figure in pale buff colour, also wearing a pointed hat and dated to the late 7th to the early 8th century, is in the James K. Reardon collection, New York, and was exhibited at the China Institute Gallery in New York in 1997.2  Three further pottery figures of foreign grooms comparable in their gestures and in their pointed hats are respectively in the Muwen Tang collection3 and the Meiyintang collection.4