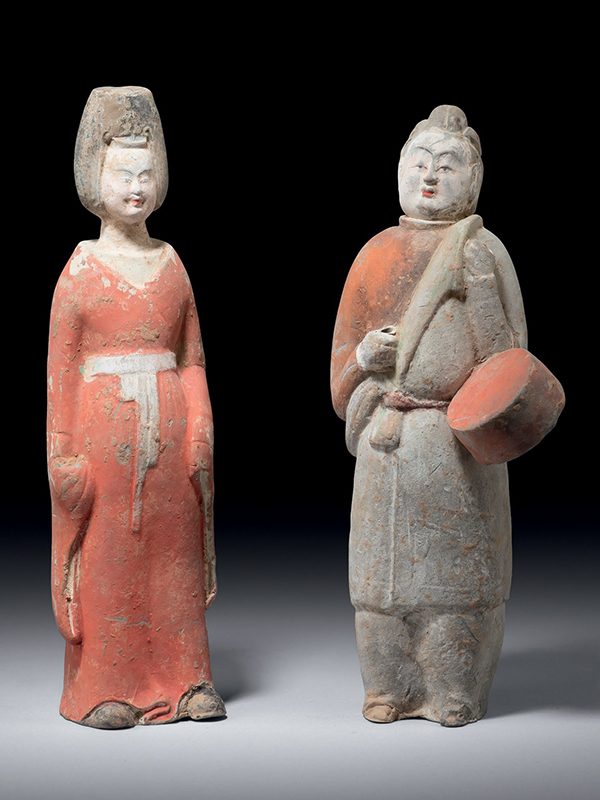 Pottery figures of a dancer and a drummer

Two grey pottery figures, one depicting a lady dressed in a long-sleeved, floor-length robe, which is tied at the waist with a belt and from which her feet just protrude. Her hair is neatly coiffed into a tall headdress that covers the ears. Her face has a gentle, smiling expression and the facial features are carefully modelled.  The male figure wears layered robes over trousers. His coat is half-undone and is belted at the waist.  He carries a large drum on a strap around his hooked left arm. The hands both have apertures, which presumably originally held wooden sticks.  The hair is neatly coiffed and his facial features are also finely modelled. Both figures largely retain the original decorative scheme of bright red, black and pink pigments. The lapels of the man’s coat have some remnants of green pigment.

Pottery figures of the short-lived Northern Qi dynasty are often exceptionally well modelled and exude a life-like quality, evident here in the way the drummer has half removed his coat and the woman is poised to perhaps sing or dance. Both figures have gentle facial expressions, indicating enjoyment. Two standing male figures, similar to the present drummer, are in the collection of Anthony Solomon.1 Although it is perhaps more common to find military figures depicted in this period, it is recorded that bands, which include drummers, accompanied troops and official processions during this period.2 One such pottery band from the William Rockhill Nelson Gallery of Art in Kansas City, USA, including several figures of drummers, was included in the exhibition Art of the Six Dynasties at the China Institute in 1975.3