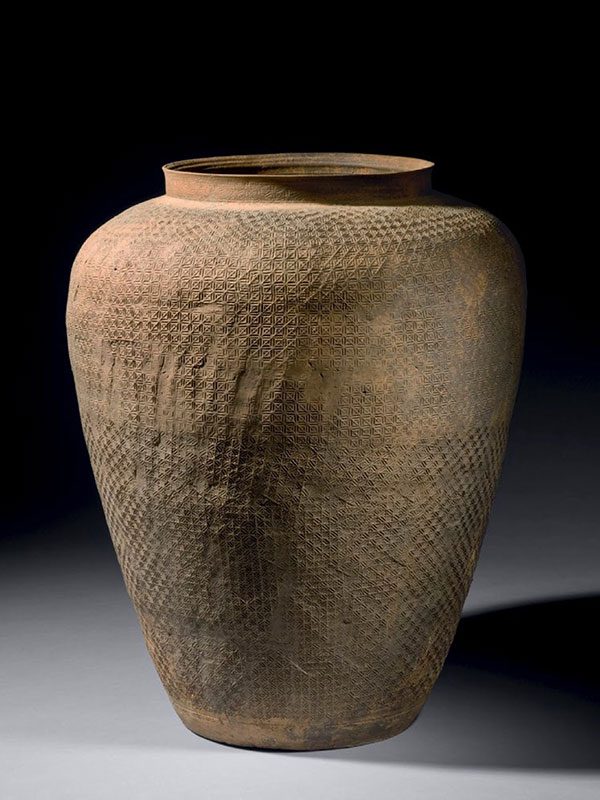 A tall pottery jar with tapered sides that rise up from a flat base to form wide rounded shoulders and that terminate in a short neck with lipped rim. The jar is decorated with an all over impressed geometric design of tiny crosses within squares. The pottery is burnished to a uniform terracotta colour.

Both the high-level production technique of early Chinese pottery and the flourishing of the textile industry are shown admirably in this impressive earthenware vessel. The pressed or punched decoration (yingtao) shows the use of textiles to decorate vessels that emerged in the late Neolithic period, continuing throughout the Zhou dynasty and after a period of decline, re-emerging towards the end of the Eastern Han period.[1]  Vessels with such impressed textile decoration are primarily attributed to Southern China, and were most likely made in Jiangsu, Zhejiang province. A similar jar of closely comparable dimensions and impressed decoration, excavated from a tomb in Jiangsu province, is dated to the Warring States period and in the collection of the Jiangyin City Museum.[2] Another comparable vessel of identical form but with larger proportions is in the collection of the Asian Art Museum of San Francisco where it is dated to the Eastern Zhou dynasty.[3] A much smaller pottery jar with a very similar pattern, dated to the Warring States period, is in the collection of the Palace Museum, Beijing.[4]